The path to olfaction 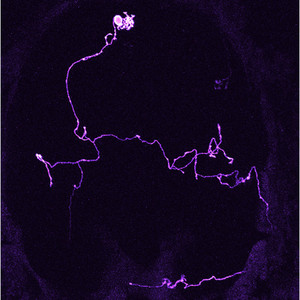 Figure 1: A fluorescently labeled mitral cell in a zebrafish. This mitral cell projects its axon to three different parts of the brain, with its axon finally terminating within the right habenula.

Olfactory signals are transmitted through the nose to the olfactory bulb, where information about distinct odors is spatially separated, leading to the formation of an ‘odor map’ in that structure. To determine how this information is sent to other parts of the brain, a team of researchers led by Yoshihiro Yoshihara and Nobuhiko Miyasaka at the RIKEN Brain Science Institute in Wako used genetic fluorescent labels to visualize the axon trajectories of mitral cells, the output neurons of the olfactory bulb, within small vertebrates called zebrafish.

They report in The Journal of Neuroscience that these neurons transmit information to several brain structures on both sides of the brain, but the odor map is not maintained intact in these higher brain structures1.

The researchers found, for example, that information from one part of the odor map is sent in a divergent manner to many different higher brain structures. At the same time, information from many parts of the odor map can converge onto a single brain structure. This mixing of olfactory information in higher brain regions could serve to control the behavioral and hormonal responses of the zebrafish to multiple odors in their environment, according to the researchers.

Axons that project long distances within the central nervous system tend to cross the midline only once before reaching their targets. But, surprisingly, Yoshihara, Miyasaka and colleagues found that some of the mitral cells they labeled crossed the midline twice, sending information along the way to as many as three brain regions on both sides of the brain (Fig. 1). This suggests that multiple brain regions simultaneously respond to identical olfactory information from a single mitral cell.

Projection neurons on one side of the brain tend to send their axons—and therefore to control—bodily functions on the other side of the body. But the researchers found unexpectedly that one particular population of mitral cells in both the right and the left olfactory bulb project their axons directly and asymmetrically only to the right side of the brain—to a structure called the right habenula. Because the habenula controls emotional and social behaviors, this may mean that zebrafish could show a left/right preference for exhibiting olfactory behaviors, such as an innate escape response.

As the next step in this research, Yoshihara says “we now aim to dissect olfactory neural circuits mediating various odor-induced behaviors, such as attraction, escape, memory, and social behaviors.”