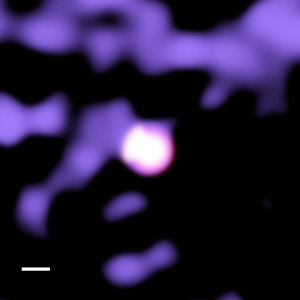 Figure 1: The reconstructed image of the hot galaxy cluster A1689. The pink area depicts the temperature variation of the ICM within A1689. Where the galaxy cluster meets large-scale galaxy structures (purple), a shock wave leads to a detectable rise in temperature of the ICM (scale bar, 10 million light years). © 2010 Madoka Kawaharada and Nobuhiro Okabe

Galaxy clusters, which are assemblies of hundreds or even thousands of galaxies, are some of the densest structures in the universe. By studying the growth and dynamics of galaxy clusters, researchers from the RIKEN Advanced Science Institute, Wako, and the Academia Sinica Institute of Astronomy and Astrophysics, Taiwan, have provided valuable clues on the evolution of the universe1.

Huge numbers of stars are not the only distinctive feature of galaxy clusters. Another important component is the intracluster medium (ICM), a hot plasma consisting of electrons and protons, that has a greater mass than the galaxies and extends throughout the vast intergalactical space of the cluster.

The researchers focused their study on the ICM of the galaxy cluster known as A1689. They analyzed x-ray observations made by the Japanese satellite Suzaku; its high sensitivity for x-ray radiation enabled the observation of A1689’s ICM to very large distances away from the center. The researchers also analyzed gravitational lensing effects, where—following Einstein’s theory of relativity—they estimated the total mass of the cluster by the way light from distant galaxies bent around different regions of A1689.

“From the gravitational lensing analysis, the mass distribution of A1689 is precisely known,” notes Madoka Kawaharada from the research team. “Therefore, by adding x-ray information … to the cluster outskirts, we [could] compare the gas dynamics directly with the mass distribution."

Kawaharada and colleagues found significant interactions between the ICM and the large-scale structure of galaxies, sometimes called the 'cosmic web’ that extends throughout the universe (Fig. 1). At the region where the A1689 cluster meets the large-scale structure, its ICM gets even hotter than its usual 20 megakelvin, with temperatures reaching 60 megakelvin. This suggests a heating effect by the shock wave that develops where the hot ICM plasma meets ‘colder’ gas from the large-scale structure. In addition, the gravitational lensing data suggest that the ICM in the shock wave region is static, whereas it is moving elsewhere, which supports it against the strong gravitational force of the cluster.

These results provide a valuable insight into the dynamics of these huge cosmic structures, particularly if they can be confirmed for other galaxy clusters, says Kawaharada. “If they behave similarly, it will be evidence that galaxy clusters do interact with the large-scale structure, confirming that they are a continuously evolving product of the structure formation in the universe.”