Gene theft by a parasitic plant 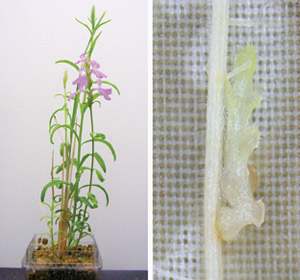 The exchange of genes between non-mating species—a process known as horizontal gene transfer (HGT)—is common in bacteria but seemed confined to mitochondrial genes in plants. HGT between plants and microbes has also been documented.

Now, a team led by Ken Shirasu of the RIKEN Plant Science Center, Yokohama, has published evidence for nuclear gene transfer between host and parasite plant species1. Mitochondrial genes are those of cellular organ-like structures, whereas nuclear genes belong to the cell’s nucleus and are therefore part of the plant’s main genome.

The findings mean that, in principle, parasitic plants could adapt rapidly by acquiring useful genes from their hosts rather than having to evolve new functions de novo—just as today’s plant breeders genetically modify crop plants by introducing into them genes for desirable traits, such as disease resistance, from other species.

As a model system, the researchers focused on the flowering plant known as purple witchweed (Striga hermonthica; Fig.1); it is a root parasite of sorghum (Sorghum bicolor), rice (Oryza sativa) and other cereals. The species is a major agricultural menace responsible for devastating crop infestations in subtropical Africa.

Sorghum and rice are members of the grass family. Like all other witchweed hosts, they are monocots, meaning that their seedlings have just one embryonic leaf, or cotyledon. In contrast, the seedlings of witchweed have two cotyledons, making it a dicot. “We reasoned that the discovery of monocot-specific genes in witchweed would provide compelling evidence for the existence of nuclear HGT between host and parasite plant species,” says Shirasu.

“Our analyses indicate that S. hermonthica most likely acquired ShContig9483 from sorghum or a related grass species, and that the transfer event was relatively recent,” Shirasu notes. “Although we do not, as yet, know the function of the protein encoded by ShContig9483, ours is the first clear evidence of nuclear HGT between host and parasite plant species,” he adds.

The researchers believe that other similar cases of nuclear HGT await discovery and that HGT may be a powerful force in plant genome evolution, facilitating rapid adaption through the acquisition of new genes.