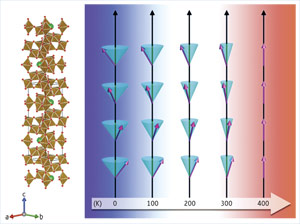 Figure 1: The crystal (left) and magnetic spin (right) structure of the magnet BaFe12O19 when some of its iron atoms are replaced by scandium and magnesium. In the crystal structure, green, red and bronze colors represent barium (Ba), oxygen (O) and the three elements iron (Fe), scandium (Sc) and magnesium (Mg), respectively. The spin structure persists to well above room temperature (~298 kelvin (K)). Reproduced in part, with permission, from Ref. 1 © 2011 The American Physical Society

The ubiquitous and unremarkable magnet, BaFe12O19, is manufactured in large volumes, has the simplest crystal structure in its class, and is often seen on refrigerator doors—but it is set for an interesting future. By substituting a few of its iron atoms with the elements scandium and magnesium, Yusuke Tokunaga and Yoshinori Tokura from the Japan Science and Technology Agency, along with Yasujiro Taguchi from the RIKEN Advanced Science Institute and their colleagues, have produced a very rare magnet1. The rarity of the magnet lies in three features that, taken together, endow it with a high degree of tunability.

Firstly, the new magnet is multiferroic: its magnetization and electric polarization are linked, and each can be potentially controlled by both electrical and magnetic fields. Multiferroic materials may allow for magnetic data storage devices that do not require magnetic fields, resulting in reduced cost, power requirements, and bulk. Other applications, such as sensors, may also be possible.

Another feature of this new magnet is that its electronic spins are arranged in a helix (Fig. 1). Therefore the handedness of the helix is a controllable material quantity, along with the material’s magnetic strength and its electric polarization. By applying a magnetic field, the researchers were able to change the geometry of the helix, which in turn increased or decreased the strength of the electric polarization.

The third distinguishing feature is that the material’s spin helix structure persists even above room temperature. This contrasts with many other known multiferroic materials, which require liquid nitrogen temperatures in order to form helical spin structures. In fact, the research team studied BaFe12O19 because a related but more complex magnet demonstrated a helical spin structure at low temperature2. It also proved relatively straightforward to fashion large crystals of BaFe12O19, making measurements and device manufacture easier.

The team concluded that the concentration of scandium, the temperature, and the applied magnetic field strength could all be used to control the strength and direction of the materials magnetic and electrical polarization, as well as the retention times of these polarizations. More generally, the new magnet uncovered by Tokunaga, Taguchi, Tokura and colleagues adds to the catalogue of room-temperature multiferroics, which material scientists have just begun to explore. A particularly alluring goal is the discovery of a material with magnetic and electrical ordering at room temperature and in the absence of magnetic field, says Tokunaga.