The importance of fundamental measurements

Figure 1: A schematic showing the steps in a key form of nucleosynthesis that only occurs in stars. When a neutron (blue, left) is captured by the element niobium (122Nb), it converts to a proton (123Nb) before decaying to molybdenum (123Mo) by emitting an electron (green, right). © 2011 RIKEN

At the Radioactive Isotope Beam Facility (RIBF) of the RIKEN Nishina Center for Accelerator Science in Wako, a research team has measured the time it takes for 38 extremely rare isotopes to decay by half1. This is the first study of half-lives for 18 of the isotopes. The data provide a long-awaited test of theoretical predictions of the rate at which these isotopes decay, and will help nuclear physicists to understand a fundamental source of many of the atomic elements and their isotopes. The results also mark an early achievement for the RIBF, which came online in 2007, and currently has “the highest production yield of heavy radioactive isotopes in the world,” according to team member Shunji Nishimura from the Radioactive Isotope Physics Laboratory, headed by Hiroyoshi Sakurai.

Making the stuff of stars 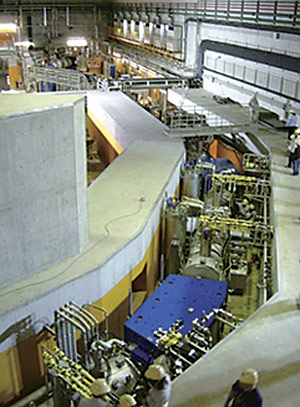 Figure 2: The first stage of the BigRIPS separator at the RIBF uses superconducting magnets to sort short-lived isotopes by mass and charge. © 2011 RIKEN/RIBF

Most stable isotopes contain slightly more neutrons than protons, which balances the repulsive force between the like-charged protons. To learn more about an important form of astrophysical nucleosynthesis—the generation of new isotopes and their elements in stars—nuclear physicists are interested in creating and studying highly neutron-rich isotopes that are far from this stable balance. However, this cannot be done in the laboratory.

Half of the elements heavier than iron are thought to be produced only in the hot, dense environment of an exploding star by the so-called ‘rapid neutron capture process’ (r process), in which a seed nucleus—typically a light element—captures neutrons faster than it can decay to stability. The r process continues until the nucleus reaches a so-called ‘waiting point’ at which the nucleus undergoes beta decay such that a neutron is converted to a proton, an electron is emitted and another neutron can be captured (Fig. 1). This series of captures and emissions continues until a stable isotope is reached.

Since the neutron densities and energies required for nucleosynthesis via the r process to occur are so extreme, physicists are still trying to piece together a complete picture of its path. To this end, they simulate the process, using the relevant isotope masses and half-lives as inputs, and then test the output of the simulations against actual isotope abundances.

A lack of information about many of the neutron-rich isotopes that may exist along the path of the r process meant that simulations have either over- or under-estimated the abundance of the end-product isotopes. Using the measurements from the RIBF, the RIKEN team is filling in key missing information needed to simulate the r process. The measurements include the half-lives of neutron-rich isotopes of krypton, strontium, yttrium, zirconium, niobium, molybdenum and technetium, all of which lie near the r-process path.

“Our results are providing the first hints as to why we observe a higher abundance of certain isotopes—particularly those in the heavy mass region—than what theory predicts,” says Nishimura.

Over the course of an eight-hour experiment, the team sorted through fragments produced by the collision of a relativistic beam of uranium ions colliding with a beryllium target. The fragments were identified as they passed through two stages of the RIBF’s ‘BigRIPS’ separator (Fig. 2), the second of which contains superconducting magnets that sort the elements by mass and charge. Finally, a highly specialized silicon detector, which signals when it is implanted with a particular isotope and the time that lapses until this isotope emits an electron (via beta decay), allowed the team to determine the isotopes’ half-lives.

The rare, neutron-rich isotopes created in the collisions typically survive for less than a tenth of a second. The RIBF facility, however, has the world’s highest intensity uranium beam and a separator at the cutting edge for discriminating short-lived isotopes, which make it a one-of-a-kind place for such measurements.

Putting elemental theories to the test

Before the experiments at the RIBF, nuclear physicists relied on theoretical models to determine the masses and half-lives of many of the isotopes along the r-process path. The irony was that with no data available, the accuracy of these models could not be tested. A key component of the work by Nishimura and his colleagues was therefore comparing their measured decay rates with those predicted by several widely used models. “Prior to our work, it was not clear which model should be used,” says Nishimura.

In particular, the team showed that two models—called KTUY + GT2 and FRDM + GT2 for short—predicted the measured half-lives of the isotopes fairly well, while the so-called FRDM + QRPA model predicted half-lives that were, in some cases, ten times more or less than what the RIKEN team observed.

“Only by measuring many isotopes in a systematic way could we say that one model is wrong, at least where the total number of protons and neutrons is around 115,” says Nishimura.

This new insight may explain why earlier r-process simulations based on certain models underestimated the abundance of heavier elements. For example, a model that overestimates the half-lives of the nuclei contributing to the r-process will overestimate the time for the r process to occur. The team’s data suggest that once the seed nucleus reaches a waiting point, it decays fairly quickly, rarely reaching the sizes needed to produce a heavier isotope.

The important new measurements are still “a tiny piece of the big puzzle of how elements like gold and uranium are created,” Nishimura says. Using the unique capabilities of the RIBF, the team plans to continue their measurements—by conducting the experiment over longer times using a higher intensity beam of uranium ions.