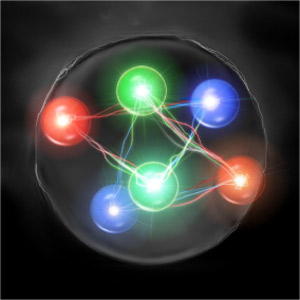 Figure 1: An artistic impression of a bound H dibaryon, a theoretical particle consisting of two up, two down and two strange quarks. © 2011 Keiko Murano

A better knowledge about the composition of sub-atomic particles such as protons and neutrons has sparked conjecture about, as yet, unseen particles. A tool based on theoretical calculations that could aid the search for these particles has been developed by a team of researchers in Japan called the HAL QCD Collaboration1.

At its most fundamental level, matter consists of particles known as quarks. Particle physicists refer to the six different types as ‘flavors’: up, down, charm, strange, top and bottom. The protons and neutrons found in the nucleus of an atom are examples of a class of particle called baryons: particles consisting of three quarks. Two baryons bound together are called dibaryons, but only one dibaryon has been found to date: a bound proton and neutron that has three up quarks and three down quarks in total.

Models that reveal the potential physical properties of dibaryons, such as their mass and binding energy, are crucial if more of these particles are to be discovered in the future. To this end, the collaboration, including Tetsuo Hatsuda from the RIKEN Nishina Center for Accelerator-Based Science in Wako, developed simulations that shed new light on one promising candidate: the H dibaryon, which comprises two up, two down and two strange quarks (Fig. 1).

The dynamics of quarks are described by an intricate theory known as quantum chromodynamics (QCD). The simulations, however, become increasingly difficult when more particles need to be included: dibaryons with six quarks are particularly testing. Hatsuda and his colleagues used an approach known as lattice QCD in which time and space are considered as a grid of discrete points. They simplified the calculation by assuming that all quarks have the same mass, but the strange quark is actually heavier than the up and down quarks. “We know from previous theoretical studies that the binding energy should be at its largest in the equal mass case,” says Hatsuda. “If we had not found a bound state in the equal mass case, there would be no hope that the bound state exists in the realistic unequal mass case.”

The results from the collaboration’s simulations showed that the total energy of the dibaryon is less than the combined energy of two separate baryons, which verifies that H dibaryons are energetically stable. “We next hope to find the precise binding energy for unequal quark masses, which represents one of the major challenges in numerical QCD simulations,” Hatsuda adds.