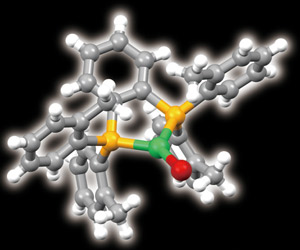 Fitting the screens of electronic devices, such as televisions and smartphones, with a new display technology called ‘organic light-emitting diodes’ (OLEDs) will reduce their energy consumption, but such screens currently require rare and expensive metal components. Now, Masahisa Osawa and his colleagues at the RIKEN Innovation Center in Wako, along with researchers from electronics company Canon, have found a way to replace these costly metals with copper1.

In addition to offering significant energy savings over conventional LCD-based displays, OLED screens improve picture quality by producing richer blacks; they also offer a wider viewing angle. In an LCD screen, each pixel is effectively a little filter, selectively blocking light produced by a large backlight. In an OLED screen, however, each pixel is a tiny light emitter such that no backlight is needed. This means that pixels in dark areas of the image consume no power, reducing energy use.

To maximize the energy-saving benefit, screen makers select OLED materials that most efficiently convert electrical current into light, a property known as high external quantum efficiency (EQE). Some of the best materials are phosphorescent metal complexes, but these are typically composed of rare and expensive metals such as iridium.

Copper complexes have long been known as potential alternatives, and would cost 1/2,000th that of iridium phosphors, according to Osawa. Until the work of Osawa and his colleagues, however, these copper complexes had a low EQE. Such complexes can be readily excited into a high-energy state, but they tend to physically distort, which dissipates their extra energy rather than emitting it as light.

The researchers resolved this problem by altering the molecular environment in which the copper sits. They wrapped each copper ion inside a newly designed bulky organic ligand. They then conducted X-ray diffraction studies, which revealed that the ligand had forced the copper to become three-coordinate—it had formed three bonds to the ligand, rather than the usual four (Fig. 1).

Osawa and colleagues also demonstrated that the EQE of their green-light-emitting copper complex increased dramatically and matched that of iridium complexes. “The three-coordinate structure is a crucial factor for high EQE, because it hardly distorts in the excited state,” Osawa explains.

The team’s next step will be to deploy the complex in a working device. Copper might not be limited to producing green light, Osawa adds. “Our goal is to make red-, green-, and blue-colored phosphorescent three-coordinate copper materials.”