A genetic alternative to fertilizer 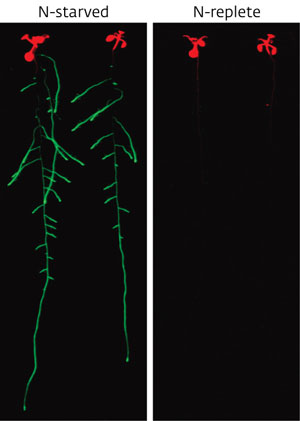 Figure 1: Green fluorescence indicates activation of the NRT2.4 transporter gene in Arabidopsis roots when nitrogen is scarce (left) but not when the soil is replete with this nutrient (right). © 2012 Takatoshi Kiba, RIKEN Plant Science Center

In Arabidopsis plants, nitrogen starvation triggers expression of the nitrate transporter gene known as NRT2.4, which allows the plants to absorb trace amounts of nitrate for survival. Now, Takatoshi Kiba and colleagues at the RIKEN Plant Science Center in Yokohama, together with scientists from France and the UK, have gained insight into how NRT2.4 works to benefit nitrogen-starved plants1.

“Although nitrogen is one of the most important nutrients for plant growth and productivity, how plants sense and respond to levels of nitrogen in soils is not well understood,” explains Kiba. “This is why we started the study focusing on theNRT2.4 gene.”

Using green fluorescent proteins and reporter enzymes to help pinpoint the location and presence of the gene, Kiba and his team found a pattern of NRT2.4 expression in the roots and shoots of Arabidopsis seedlings (Fig. 1).

The researchers worked with 10-day-old Arabidopsis seedlings, each weighing around 1 milligram, and measured the tiny amounts of nitrate absorbed by the plants. “Detection of nitrate influx at very low concentration was the main challenge of this work,” explains Kiba. “To obtain valid data, we had to improve the precision of the assay and measurement methods.” They prepared their samples very carefully in assays before measuring nitrate levels with high-performance liquid chromatography and an automated N/C analyzer-mass spectrometer.

The improved precision paid off, because the team’s results revealed that the NRT2.4 gene is crucial in increasing nitrate absorption by Arabidopsis plants at very low concentrations. However, not all plants are equal. “Our preliminary investigation suggests that some domesticated crop plants do not have any mechanism equivalent to NRT2.4 in Arabidopsis,” Kiba explains. “It is possible that domesticated plants have lost such a mechanism because it is not necessary in a fertilized environment.”

Introducing the NRT2.4 gene to crops may improve nitrogen uptake efficiency in the future. Kiba notes that “this could eventually enable us to reduce nitrogen fertilizer use and to conduct sustainable agriculture easily.”