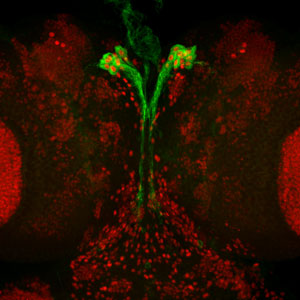 Figure 1: A cluster of IPCs within the fruit fly brain (green), with red fluorescent labeling indicating expression of the nuclear protein Dachshund. Reproduced from Ref.1 © 2012 by the National Academy of Sciences

Fruit flies and humans both rely on hormones secreted by insulin-producing cells (IPCs) for metabolic maintenance and the regulation of numerous other physiological processes. In some ways, fly IPCs differ considerably from their mammalian counterparts; they emerge from different embryonic precursor cells, and reside within the brain rather than the pancreas. Yet, they also show striking functional similarities. Now, new findings from Takashi Nishimura and colleagues at the RIKEN Center for Developmental Biology in Kobe have demonstrated that these cells employ highly similar molecular mechanisms to manage hormone production1.

Fly IPCs secrete various Drosophila insulin-like peptides (Dilps), which contribute to diverse functions including regulation of growth and metabolic activity, and Nishimura’s team was interested in understanding regulation of Dilp production. Via gene expression analysis, they learned that numerous proteins involved in eye development also contribute to IPC differentiation and the expression of Dilp-encoding genes.

Among these, they identified a prominent role for a protein called Dachshund, which is continuously expressed in IPCs (Fig. 1) and promotes production of Dilp5 at both early and intermediate stages of fly development. A second protein called Eyeless was known to bind to the gene encoding Dilp5. Nishimura and colleagues learned that Eyeless acts in a similar fashion to Dachshund. In fact, they demonstrated that the two act cooperatively, forming a complex that binds to and activates the dilp5 gene.

Both Dachshund and Eyeless have several mammalian counterparts that, remarkably, appear to act in a similar fashion in mammalian IPCs. The researchers determined that the mammalian homologues of these fly proteins assemble into a complex and work synergistically to switch on the production of insulin in cultured human cells. Likewise, experiments reducing expression of any of these proteins in rat pancreatic cells consistently resulted in reduced insulin production. “Although analogies between Drosophila IPCs and mammalian pancreatic islet cells have been described previously,” says Nishimura, “we show here for the first time that the molecular mechanism for the regulation of insulin expression is conserved.”

Many complexities regarding the regulation of Dilp5, however, remain to be untangled. For example, new experiments from Nishimura and colleagues have shown that nutrient deprivation leads to reduced expression of Dilp5, even though both Dachshund and Eyeless levels appear to remain normal. “It is possible that IPCs receive nutritional signals, and this signal modulates Dachshund and Eyeless activity to regulate Dilp5 expression,” says Nishimura. Future experiments should help clarify how diet-induced signals modulate production of this and other key metabolic hormones.