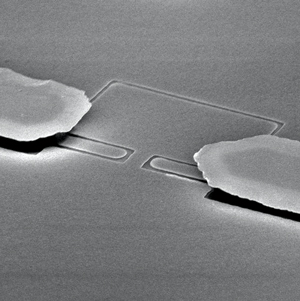 If people bump into one another too often at a building’s entrance, the owner could opt to build a larger doorway. But physicists from the RIKEN Advanced Science Institute in Wako have shown that this intuitive solution may not always work—especially at the nanoscale. The team of David Rees, Hiroo Totsuji, and Kimitoshi Kono has discovered that when crystalline electrons pass through a narrow ‘nanoconstriction’, particle movement sometimes decreases as the bottleneck gets wider1.

Normally, researchers have trouble understanding how electron systems move through constrictions because of the multiple classical and quantum forces acting on these particles. The RIKEN team recently solved this problem by studying surface-state electrons on liquid helium cooled to nearly absolute zero2. At these temperatures electrons are trapped in a two-dimensional layer on the helium surface, where the only interactions present are classical charge repulsions between electrons, creating an ideal environment to study the fundamentals of correlated particle transport.

The researchers constructed a special point-contact device on a silicon wafer to observe the dynamic electron transport (Fig. 1). A series of tiny grooves on the wafer first draws the low-temperature liquid helium into two opposing ‘reservoir’ regions through capillary action. Then, a voltage-controlled ‘gate’ controls the current of surface electrons between the reservoirs by gradually opening a narrow bottleneck junction.

Rees and colleagues reduced the temperature of the device below 1 kelvin (K) to freeze the surface electrons into a triangular lattice known as a Wigner crystal. The team then applied a potential between the reservoirs to slowly push the  electron crystal through the bottleneck. Surprisingly, the movement of these crystalline electrons was hardly straightforward: at periodic intervals, current suddenly dipped when the gate opened wider.

Molecular dynamics simulations revealed that interactions between the Wigner crystal lattice and the nanoconstriction’s geometry caused the unusual current oscillations. If the nanoconstriction had a different width than the spacing between electrons in the Wigner system, the electron crystal weakened and flowed unimpeded between the reservoirs. But when the confinement potential matched the lattice spacing, the crystal stayed strong, preventing particles from moving through the bottleneck.

Rees notes that these oscillations between weak and strong crystal regimes may have implications for other systems involving constrictions. “For systems such as colloids in a thin channel, grains passing through a silo, or even pedestrians walking through doorways, our results show that the geometry of such bottlenecks can be crucial in determining the rate of particle flow,” he says.