Pinpointing a driver of liver cancer 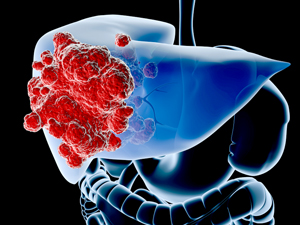 Liver cancer is the sixth most common cancer worldwide and the third leading cause of cancer-associated deaths. Yet even for such a frequent and deadly disease, the pathogenesis of this cancer remains obscure. Now, a team of scientists in Japan has shown that genes involved in regulating how tightly DNA is wound into chromosomes are commonly mutated in liver tumors1 (Fig. 1). The finding points to potential new and much-needed therapeutic strategies.

“Several types of drugs under development target chromatin regulators, and these drugs may be effective in liver cancer,” says Hidewaki Nakagawa, a cancer geneticist at the RIKEN Center for Genomic Medicine in Yokohama, who led the work.

Nakagawa and his colleagues decoded the entire genomes of liver tumors from 27 different patients—25 of whom carried hepatitis viruses, the most common cause of liver cancer, and two without associated infections. They also sequenced the DNA of matched healthy white blood cells for comparison.

Some striking patterns emerged. Across all 27 cancer genomes, the researchers discovered more than 2,000 protein-altering mutations, with frequent alterations occurring in 15 different genes—many of which affect chromatin, the mass of DNA and proteins that condense to form chromosomes and affect gene expression. Notably, 14 of the 27 tumors had mutations in at least one chromatin regulatory gene. In cell culture, liver tumors lacking these genes displayed a marked increase in cell proliferative capacity. “Genetic alterations in chromatin regulators can regulate and produce epigenetic alterations in cancer,” Nakagawa explains.

The findings are consistent with those reported last year by an independent group that showed that ARID2, a chromatin remodeling gene also implicated by Nakagawa and his team, was mutated in six of the 33 liver cancers considered2.

In addition to chronicling the mutational profile, Nakagawa and his colleagues determined where hepatitis B-associated tumors had the viruses inserted into their genomes. Consistent with independent findings reported in the same issue of Nature Genetics3, in four of the 11 relevant cancers they found viral integration within or near the TERTgene, which is involved in maintaining the caps on the end of chromosomes. Targeting the TERTlocus, therefore, offers another therapeutic drug lead for this nasty cancer.