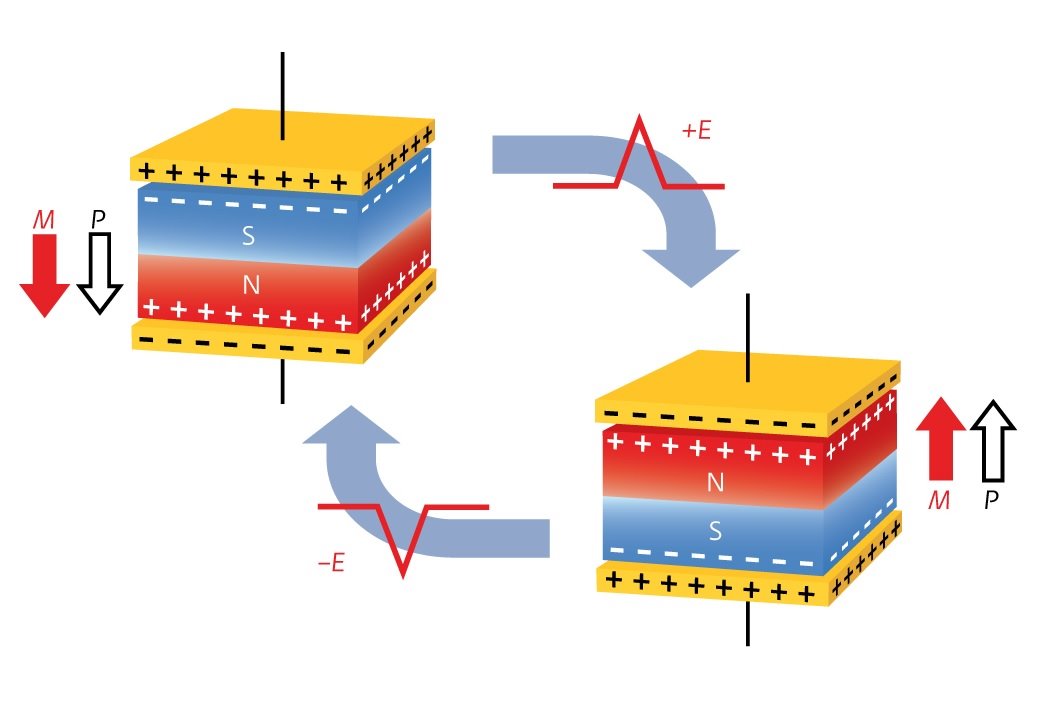 Figure 1: Switching magnetism. In the material studied the magnetic moment (M) and the electrical polarization (P) are coupled, so that negative electrical charges (-) accumulate near the magnetic southpole (S), and positive ones near the northpole (N). By applying an electric voltage (E), the direction of M and P can be reversed. © 2012 Yusuke Tokunaga, RIKEN Advanced Science Institute

Researchers at the RIKEN Advanced Science Institute, Wako, have discovered a material with magnetic orientation that can be fully switched by electric voltages1. Such switchable materials have applications for magnetic data storage or novel electronic devices that use the electron’s magnetic properties. As Yusuke Tokunaga from the research team explains, “Reversal of magnetization by a voltage enables ultra-low power consumption electronic devices because applying a voltage and not an electrical current means that such devices are free from Joule heating loss.”

Many materials show magnetism and many also show electric polarization, where permanent electric dipole moments persist even when the external electrical voltage is turned off. However, only a few materials—known as multiferroics—show both these so-called ferroic properties simultaneously. In many multiferroics, these two properties are coupled so that the electric polarization can be changed around by switching the magnetic field. But from a practical perspective, for example in data storage, the opposite scenario of switching magnetism with an electrical voltage is more interesting (Fig. 1). Until now, this type of coupling had not been observed in a material.

The first type of coupling is occurs, for example, in GdFeO3. This material has been shown previously to be multiferroic by the same research group, but changes in the electric field had only minor influences on its magnetism. The related compound DyFeO3, on the other hand, is known to have a strong coupling between magnetism and electric polarization in principle, but it is not a multiferroic as it requires external magnetic fields to show this coupling. The researchers’ aim was to try and unify these properties by synthesizing crystals of (Dy,Gd)FeO3, and indeed, some of the resulting compounds—including compounds where Tb was used instead of Gd—show the desired properties. Not only are they multiferroic, but for the first time they also show a complete reversal of magnetization by an electric field.

So far, the effect is limited to temperatures barely a few degrees above absolute zero. Extending the work to compounds that show this behavior at higher temperatures is an important next step, says Tokunaga. “For the practical application toward ultra-low power consumption devices, we need to find new multiferroics that can operate at higher temperatures.” With the insights gained on how to achieve magnetic switching, he believes this is highly possible.