Magnets in which less is more 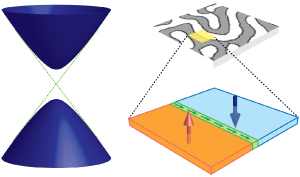 Magnetism in semiconductors arises mainly through the interaction of magnetic ions and electrons. Normally, the more electrons contribute to the magnetism, the stronger the magnet. However, researchers at the RIKEN Advanced Science Institute at Wako, have now discovered a magnet that becomes weaker as the number of electrons increases1. The work has implications for both fundamental science as well as future energy-saving technologies.

“Our results have verified the most basic features of this long hypothesized magnetic state—the stability of the magnet without excess electrons,” says research team member Joseph Checkelsky. “A potential byproduct of such an unusual state of matter is the presence of an energy-dissipation-free electrical mode for low power electronic applications,” he says.

The new magnet, made from bismuth telluride to which the magnetic material manganese is added, belongs to a recently discovered class of materials known as topological insulators. In these materials, electrons on the surface behave very differently to those in the rest of the material. For example, they do not scatter easily, which has advantages for electronic applications. Electrons in the surface state also occupy a special electronic state, the so-called Dirac cone (Fig. 1, left). In the magnetic topological insulator, the electrons near the Dirac point are responsible for the material’s magnetic properties. However, only a limited number of electrons can be in this surface state. As electrons are pumped into the system, the crucial electronic states are filled and the magnetism is weakened.

The researchers observed this effect by controlling the injection of electrons into the material. At low electron densities the critical temperature above which magnetism disappears is higher than for the case of a higher number of injected electrons. Above a certain threshold the magnetism even disappears completely.

Another effect occurs at the interface between magnetic domains of different orientation on the surface that form a kind of patchwork within magnets. At these domain walls, magnetism falls to zero, which brings out another property of magnetic topological insulators—the electric currents flow without loss around the edges, in this case along the domain walls (Fig. 1, right). Thus, the conductivity of the sample is also influenced by magnetism and therefore the carrier concentration.

Controlling the quality of the material is an issue for the development of actual applications. Checkelsky believes new developments in thin film technology could be one way to facilitate the transition to applications.