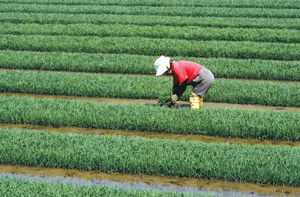 When plants become infected, they rally an immune response by producing the hormone salicylic acid (SA). This molecule not only marshals defenses at the immediate site of initial infection and destroys affected cells, but also triggers a distributed response that elevates resistance throughout the plant. Since SA governs a generalized pathogen response, this pathway represents a potentially useful target for chemically boosting the immunity of crops against a broad spectrum of threats.

Unfortunately, the SA response also stalls plant growth. Thus, scientists have been searching for compounds that indirectly increase plant ‘readiness’ against infection by priming the SA pathway for rapid activation, rather than directly switching on SA signaling. For example, soil treatment with the compound probenazole results in robust immune-priming, but only for a subset of crops. “Probenazole works well for rice, but less so for dicotyledon plants such as vegetables,” says Ken Shirasu of the RIKEN Plant Science Center in Yokohama. He notes that although other probenazole-like priming chemicals are commercially available, these too are largely limited to use with rice (Fig. 1).

To isolate and characterize new molecules that might offer a useful foundation for more broadly effective immune-priming agents, Shirasu teamed up with colleague Yoshiteru Noutoshi, now at Okayama University. Starting with a library of 10,000 commercially available molecules, they examined the extent to which pre-treatment with each could induce a defensive ‘self-destruct’ response in thale cress (Arabidopsis thaliana ) cells infected with the bacterial pathogen Pseudomonas syringae (Fig. 2). Their work uncovered a broad family of candidate-priming compounds called ‘imprimatins’, which could ultimately provide plant scientists with the starting material for a far more effective armor against infection1.

The researchers initially selected two molecules that had no ill effect on healthy Arabidopsis cells, but induced rapid cell death following bacterial exposure. Because of their similar effects, Shirasu and Noutoshi classified both molecules as imprimatins, but categorized them as two different subtypes based on clear differences in their chemical structure. The researchers then searched a public chemical database using imprimatins A1 and B1 as references; they identified an additional ‘relative’ for each, and named them A3 and B2, respectively. Pretreatment of Arabidopsis seedlings with each of the four compounds effectively suppressed bacterial growth, confirming the compounds’ effectiveness as immune-response primers.

The PATHOGENESIS-RELATED1 (PR1 ) gene is an early target for activation by SA, and as none of these four compounds induced PR1 expression in uninfected plants, it was clear that they were not simply switching on the signaling pathway. Once infected, however, the treated plants showed increased PR1 activity relative to controls. The researchers were able to link this response to elevated levels of SA.

Because of its growth inhibitory effects, plants gradually stop SA signaling via a process called glucosylation: an enzyme tacks a glucose sugar molecule onto SA to transform it into the inactive derivative SA-2-O-β-D-glucoside (SAG). The A and B imprimatins halt this transformation by inhibiting enzymes responsible for converting SA to SAG. Noutoshi and Shirasu identified two specific SA-glucosylating enzymes that appear to be primary targets for these compounds.

In a subsequent study, the researchers investigated another imprimatin identified in their initial screen2. This molecule differed sufficiently from the others to merit its own category; Shirasu and Noutoshi dubbed it imprimatinC1. Similar to its counterparts, imprimatinC1 triggered cell death specifically in response to infection and thereby conferred bacterial resistance to plants. Further experiments, however, indicated that this molecule acts by a distinct mechanism. Unlike the A and B imprimatins, imprimatinC1 appears to act as a partial mimic of SA, and treatment with this compound directly stimulated PR1 expression.

Careful chemical analysis revealed that imprimatinC1, and related imprimatin compounds, most likely undergo a transition to become metabolites that trigger certain downstream events in the SA pathway. The researchers suggest that C1 may act by interacting with a specific subset of the various receptors that normally bind this hormone.

Just the tip of the beansprout

The molecules from this screen are unlikely to move directly into the agricultural world, as they currently lack the required potency. However, they do offer promising starting points. For example, the researchers were able to confer strong antibacterial protection to plants by inactivating the genes encoding the two SA glucosyltransferase (SAGT) enzymes targeted by the A and B imprimatins. This confirmed that direct inhibition of SA-to-SAG conversion is a viable approach for effective immune priming. Furthermore, ‘prodrugs’ such as imprimatinC1—which need to be metabolically processed before they become active—are often more stable than compounds that are already metabolically active. This is a desirable trait for agricultural chemicals. At least some of the SA-responsive pathways present in Arabidopsis seem to be evolutionarily conserved in other vegetable crops. This suggests to the researchers that the imprimatins may confer protection to the crops that are presently left vulnerable by probenazole.

Noutoshi and Shirasu are still examining several other promising candidates from their initial screen. “We have more to analyze, and the most interesting compounds have not yet been published,” says Shirasu. He notes that one of the major challenges has been identifying molecules that are truly protective. Several of the candidates trigger cell death in infected cells while failing to stimulate an accompanying immune response. Fortunately, several molecules have made the cut, so the researchers are now working hard to characterize the ‘best of the best’. “We already know their target proteins,” says Shirasu, “and now we’re trying to elucidate their biochemical function.”

Ken Shirasu graduated from the University of Tokyo, Department of Agricultural Chemistry in 1988, and was awarded his PhD in genetics from the University of California, Davis, in 1993. He then served as a Salk-Nobel postdoctoral fellow at the Salk Institute, USA, where he studied plant immunity. In 1996, he joined the Sainsbury Laboratory, UK, as a researcher, and in 2000 became a group leader. He joined the RIKEN Plant Science Center as a group director in 2005, and since 2008 has also held a position as a visiting professor in the Department of Biological Sciences at the University of Tokyo.