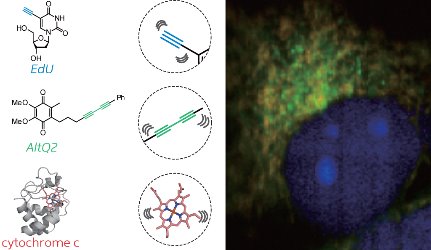 Brightly fluorescing molecular tags have given scientists the unprecedented ability to see into living cells to study large molecules such as proteins. The technique is less well suited for imaging small bioactive molecules as the bulky tags required for fluorescent labeling can be larger than the molecule of interest itself. Mikiko Sodeoka and her colleagues from the Synthetic Organic Chemistry Laboratory, RIKEN and the JST ERATO Live Cell Chemistry Project recently developed an alternative technique called alkyne-tagged Raman imaging (ATRI) that employs far smaller tags. The same team has now developed design rules for maximizing the signal strength of the Raman probes, making it possible to image multiple small molecules within the same cell1.

Raman imaging identifies molecules by their characteristic interatomic vibrations. Although cells are crowded with molecules, the Raman spectrum of live cells incorporates a ‘silent region’ within which few molecules generate a Raman signal. Sodeoka and her colleagues previously showed that a two-carbon tag called an alkyne produced a strong signal within this region, which they exploited to image small molecules within living cells.

In their latest research, the team systematically examined various alkyne-type structures and measured the Raman signal that each tag generated. From these results, they developed design rules for creating tags with the strongest possible Raman signal. “Using this guide,” says Sodeoka, “we can design potent probes more efficiently.”

The researchers showed that two adjacent alkyne groups, or an alkyne attached to a benzene-like aromatic ring, made efficient tags for ATRI. Using this general design approach, they tagged and simultaneously imaged two small molecules within a live cell (Fig. 1).

Although Sodeoka’s team has been able to maximize the Raman signal strength, further improvements in signal sensitivity are required to bring the sensitivity of ATRI up to a level comparable to that for fluorescent microscopy. The team plans to achieve this by improving the Raman microscope itself, as well as continuing to refine their tags. “A combination of chemical and engineering approaches could make a synergistic improvement to sensitivity,” says Sodeoka. “After the improvement of sensitivity, we will apply ATRI for chemical biology research. We expect ATRI to be a key technique in this field.”