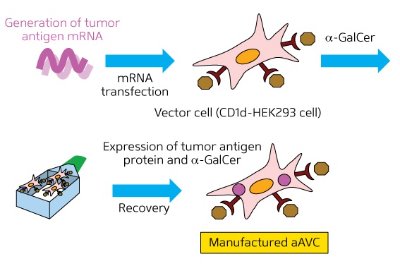 Tumor cells often express proteins that set them apart from their healthy neighbors. These very same proteins can also help the immune system to recognize and destroy the cancer. Several research groups and companies have already demonstrated proof-of-concept for antitumor therapeutic vaccines based on this principle, typically employing ‘retrained’ dendritic cells (DCs) harvested from a patient’s own immune system. To date, however, such vaccines have demonstrated only limited effectiveness in beating back tumor progression. Shin-ichiro Fujii, Kanako Shimizu and colleagues from the RIKEN Research Center for Allergy and Immunology have now revealed research that could supercharge the potency of future cancer vaccines1.

DC-based vaccines directly stimulate ‘adaptive’ immunity, which is directed against specific molecular targets. “DCs play a pivotal role in determining the character and magnitude of an immune response,” explains Fujii, “and the loading of patient DCs with tumor-specific antigens is one of the most promising current immunotherapeutic strategies.”

Using a mouse model, Fujii’s team demonstrated that the natural antitumor DC response can be considerably ramped up by stimulating invariant natural killer T (iNKT) cells from the ‘innate’ immune system, which triggers a more generalized response against disease.

Key to their iNKT cell-based strategy is the use of artificial adjuvant vector cells (aAVCs), derived from human kidney cells (Fig. 1). The aAVCs are dosed with mRNA encoding a tumor-specific antigen to yield a protein that trains DCs to recognize their ‘enemy’. The aAVCs are also treated with α-galactosylceramide, a synthetic glycolipid that is a potent activator of iNKT cells. The iNKT cells go on to accelerate maturation of host DCs, which in turn promote adaptive immune response against the selected tumor antigen.

Initial experiments demonstrated that aAVCs producing the protein ovalbumin activated DCs in mice and effectively stalled growth of grafted tumors expressing this protein. Importantly, this treatment proved more effective than a conventional vaccine approach using DCs injected with ovalbumin mRNA. Subsequent experiments confirmed that aAVCs could also elicit immunity against the melanoma antigen MART-1. “Even the injection of one cell could evoke both the innate and adaptive immune response,” says Fujii.

Further tests using dog models revealed a clear immune response with no notable adverse effects, even in animals receiving multiple doses of aAVCs. These promising preclinical results could potentially pave the way for human clinical trials in the near future. “We have some candidate tumor antigens,” says Fujii, “and now we need to examine the possibility of using this technique for these antigens in terms of efficacy and safety.”