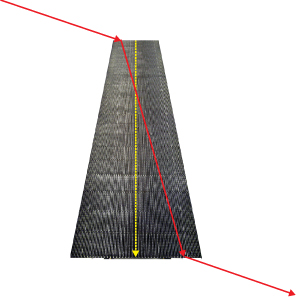 Figure 1: The path of an x-ray beam is offset as it passes through a silicon–germanium crystal with a repetitively strained atomic structure. © 2013 Yoshiki Kohmura, RIKEN SPring-8 Center

X-rays, like visible light, are a form of electromagnetic radiation and have a very short wavelength and a relatively high energy. The utility of x-rays in medical imaging is due to the very weak interaction between these high-energy electromagnetic waves and matter, which makes it possible to see through soft tissue to the bones beneath. However, this property also makes the lenses and mirrors equivalent to those used for visible light much more difficult to develop for x-ray wavelengths. Yoshiki Kohmura and colleagues from the RIKEN SPring-8 Center have now shown that the optical translation of x-rays can be achieved using materials carefully engineered at the atomic scale1.

The distance separating atoms in many crystals, on the order of a tenth of a nanometer, falls within the range of x-ray wavelengths. This means that the precise atomic arrangement in crystalline materials can have a pronounced influence on the way x-rays propagate through such solids. The phenomenon is in fact exploited for the investigation of unknown crystal structures through analytical methods such as the widely used x-ray diffraction technique. However, Kohmura and his team examined this concept in reverse to find out whether a well-known and tunable atomic structure can be used to control the propagation of x-rays.

The researchers grew a thin film of germanium—just a few atoms thick—on a silicon substrate, and then exposed the film to a beam of x-rays with a wavelength of 0.08 nanometers. By setting the x-ray incidence angle slightly outside of what is known as the Bragg reflection condition, the team found that the x-ray beam, which usually undergoes negligible refraction when passing through crystalline materials, was shifted or ‘translated’ from the original path by a few hundred micrometers (Fig. 1).

As the atoms in germanium are normally spaced further apart than those in silicon, producing a thin film of germanium on the silicon substrate resulted in the formation of small, self-assembled islands or ‘quantum dots’ of germanium. The quantum dots also produced strain in the underlying silicon substrate by pulling the silicon atoms further apart than they would normally like. Kohmura believes that this repetitively strained atomic lattice is largely responsible for enhancing the x-ray translation effect, a phenomenon he refers to as ‘x-ray surfing’.

“Strain engineering is rapidly developing in the semiconductor industry as a means of enhancing the electronic properties of silicon,” explains Kohmura. “By controlling the atomic arrangement to optimize x-ray translation, we will gain a previously unimaginable component for x-ray optics.”