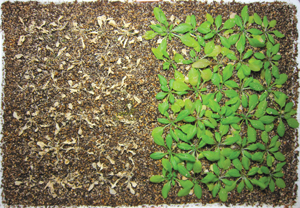 Today’s crops are subjected to all kinds of stresses. Drought and high salinity are particularly damaging to plant growth and development, limiting crop productivity across the world. Developing crop varieties that can adapt to such stresses has therefore never been more important. A team led by Lam-Son Tran at the RIKEN Center for Sustainable Resource Science has now characterized a key set of genes that transmit signals relating to drought and salinity stresses in the model plant Arabidopsis thaliana1.

Plants deal with stress through a process involving sensing and response. The cytokinin-related phosphorelay is a multi-step pathway that mediates abiotic stress mitigation. It comprises histidine kinases, which receive cytokinins, histidine phosphotransfer proteins (known as AHPs in Arabidopsis), and response regulators that control downstream genes. Histidine kinases have previously been shown to regulate stress signalling pathways, but evidence regarding the identity and function of AHPs has been lacking.

Tran’s team identified three AHPs—AHP2, AHP3 and AHP5—that provide negative control of drought stress responses. Grown under a water deficit (Fig. 1), ahp2,3,5 triple-mutant plants were found to be highly drought tolerant. Double mutants showed a lower tolerance, but still higher than that of wild-type plants, indicating that the genes function most effectively in combination. “In other biological processes, however, each gene may have a specific function of its own,” says Tran.

To identify stress-related genes controlled by the phosphorelay, the researchers conducted a genome-wide transcription analysis, comparing wildtype and ahp2,3,5 mutant Arabidopsis plants. Under drought stress, 4,977 genes were significantly upregulated in mutant plants compared to the wild-type, and another 3,431 were downregulated. Several of the upregulated genes were found to be involved in the synthesis of cuticular waxes and cell-wall fatty acids. This corroborated the team’s observation that the increased protection from water loss found in mutant plants was achieved by lowering electrolyte leakage through the cell membrane.

The team’s findings have huge potential importance for producing transgenic crops with enhanced drought and salinity tolerance through rapid deactivation of the cytokinin-related phosphorelay. “The tricky part will be to silence the histidine phosphotransfer genes only upon drought or salinity stress, to avoid any negative effects on plant growth,” says Tran.