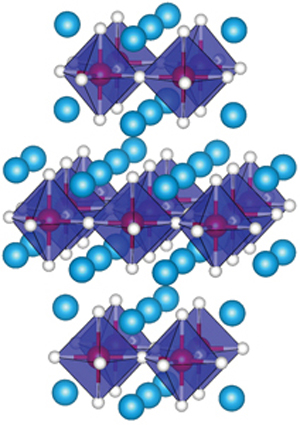 High-temperature superconductors are some of the most widely studied materials in physics, where the discovery of new compounds often provides insight into the complex physics that underlies them, as well as revealing interesting new electronic phenomena. Seiji Yunoki and colleagues from the Computational Quantum Matter Research Team at the RIKEN Center for Emergent Matter Science may have made such a discovery through their prediction of an unconventional superconducting phase in compounds based on iridium oxide1.

The high-temperature superconductors commonly investigated by scientists are often copper oxide structures consisting of different atomic layers stacked on top of each other. It is along these atomic planes that the superconducting electrical currents flow. Interestingly, the iridium oxide Sr2IrO4 studied by Yunoki and his colleagues has a very similar layered structure (Fig. 1). The magnetic arrangement of the atoms in these layers—important for the superconducting state in such materials—is also similar to that in copper oxides.

Not everything in the iridium oxide system is comparable to that in copper oxides, however. Iridium is a far heavier element than copper, and its outer electrons circle the atomic cores at a much greater distance. The different path of these electrons also influences their magnetic property, or spin. Indeed, ‘spin-orbit coupling’ leads to very different spin effects in the iridium oxides that influence not only superconductivity, but also other electronic properties—including those that make iridium oxides of possible interest for electronics applications.

“A number of groups have tried to make iridium oxide superconductors,” says Yunoki. “So far, they have been able to make the compound metallic, but they have not yet succeeded in making it superconducting.”

To probe the possible reasons for the elusiveness of superconductivity in iridium oxides, Yunoki’s team developed a theoretical model to describe the compound’s properties. They were able to calculate that superconductivity could be achieved by introducing atoms of other elements to provide a surplus of electrons—a process known as electron doping. “This is exactly where our theoretical work becomes valuable,” says Yunoki. “We have provided a guideline by showing that, as opposed to copper oxides, the superconductivity in Sr2IrO4 appears most likely with an electron surplus, not with a deficit.”

The researchers now plan to assist in the search for iridium oxide superconductors, and to investigate possible applications of their compound’s spin properties in electronics. Already one of the rarest elements in the Earth’s crust, Iridium’s true value may therefore be hiding in its useful electronic properties.