It’s all in the symmetry 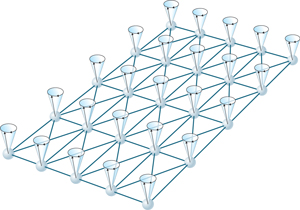 Figure 1: Spin waves cause the magnetic spins in a ferromagnet to precess around their ordered positions. © 2013 RIKEN Nishina Center for Accelerator-Based Science

A sphere looks the same no matter how it is rotated. Squash it on one side, however, and this symmetry is broken. A similar change from a high-symmetry state to a low-symmetry state defines many phase transitions in solids such as magnetic ordering, superconductivity and crystallization. By solving a long-standing problem in theoretical physics, Yoshimasa Hidaka of the Quantum Hadron Physics Laboratory at the RIKEN Nishina Center for Accelerator-Based Science has now developed a general theory that allows the low-temperature properties of such systems to be predicted from their symmetries1.

Physicists use the term ‘spontaneous symmetry breaking’ to describe a system of particles that chooses a state with a lower symmetry than the physical equations that describe it. The simplest example is a ferromagnetic material, in which the magnetic spins of electrons lower their energy by lining up with their neighbors. At low enough temperatures, all of the spins point in one direction. Theoretically, the magnet has the same energy whether the spins all point northwest or southeast; in other words, the theory is rotationally symmetric, while the ordered spins are not.

Very little energy is required to disrupt the ordered states that result from spontaneous symmetry breaking. In the magnet, for example, these disturbances correspond to ripples—called spin waves—in which the spins precess around their ordered positions (Fig. 1). Knowing the number of ways these disturbances can occur allows theorists to calculate low-temperature properties such as a material’s heat capacity. In principle, this number depends on how symmetry is broken in a system. “If a general counting rule is known, low-energy or low-temperature behaviors can be predicted,” explains Hidaka.

In the 1960s, physicists derived a counting rule for relativistic systems—those in which particles travel at close to the speed of light. This rule, called the Nambu–Goldstone theorem, says that the number of allowed disturbances equals the number of symmetries broken in a phase transition.

Hidaka was interested in finding a more general version of this rule that would apply to non-relativistic systems like solids or liquids—something that theorists have been trying to do for 50 years. He succeeded by adapting a theory used to describe the statistical motion of particles.

“The generalization of the Nambu–Goldstone theorem has been a long-standing problem. This general counting rule is universal,” he says. Hidaka believes the new theorem could also be helpful in the study of neutron stars, which have been difficult to model theoretically.