A drug lead for leukemia 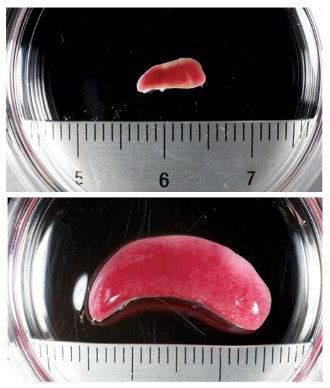 Figure 1: Spleens from mice engrafted with human AML cells after 52 days of treatment with the small-molecule drug RK-20449 (upper) and prior to treatment (lower). © 2013 AAAS

Acute myeloid leukemia (AML) is a difficult cancer to overcome. Although most people with the disease achieve a period of remission following a standard dose of chemotherapy, the cancer will typically return. Now, in a breakthrough that could lead to the development of a drug that promises to prevent such relapses, a team of researchers led by Fumihiko Ishikawa of the Laboratory for Human Disease Models at the RIKEN Center for Integrative Medical Sciences has discovered a small-molecule drug that wipes out AML cells in a mouse model1.

Ishikawa and his team previously found that the expression of hematopoietic cell kinase (HCK)—an enzyme involved in blood cell differentiation and proliferation—was greater in leukemia stem cells taken from individuals with AML than in blood stem cells obtained from people without cancer.

In their latest research, Ishikawa’s team assessed the potential of targeting this enzyme as a possible therapeutic agent for human use. They found that by knocking down HCK expression in cell culture with counteracting RNA molecules, they could achieve a significant reduction in both the growth and survival of the AML cells.

The team then enlisted the help of Toshio Goto and colleagues at the RIKEN Program for Drug Discovery and Medical Technology Platforms to search for a chemical agent that possessed the same AML-defeating benefits. A high-throughput screen of 50,000 compounds for HCK inhibitors, in which the most likely compounds were compared with the results of a parallel computer model-based screen, identified one molecule as the most promising drug candidate. This chemical, a pyrrolo-pyrimidine derivative, was structurally analyzed by x-ray crystallography and subsequently optimized to yield the small molecule RK-20449.

Experiments with human AML cells, both in in vitro cultures and implanted into mice, showed that the drug reduced the number of leukemia stem cells and shrank the tumor burden of the disease (Fig. 1). If the results are translatable to the clinic, the drug could help prevent and overcome cancer relapse for the 28,000 people newly diagnosed with AML in the United States, Europe and Japan each year.

“If RK-20449 or its derivatives can eliminate AML cells, including leukemia stem cells, in patients, that will advance AML treatment significantly,” Ishikawa says. “After thorough and careful examination of the toxicities of RK-20449, we hope that our findings can be translated into a safe and effective treatment for AML.”