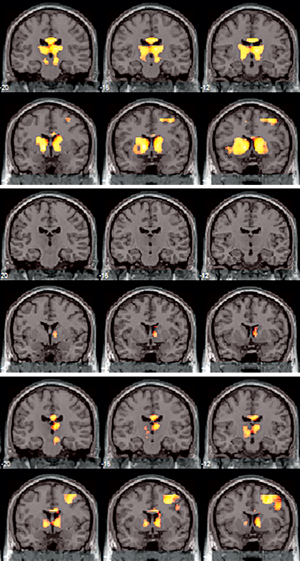 Attention-deficit/hyperactivity disorder (ADHD) is characterized by abnormal behavioral traits such as inattention, impulsivity and hyperactivity. It is also associated with impaired processing of reward in the brain, meaning that patients need much greater rewards to become motivated. One of the common treatments for ADHD, methylphenidate (MPH), is known to improve reward processing in the short term, but the long-term effects have remained unclear.

Kei Mizuno from the RIKEN Center for Life Science Technologies, in collaboration with colleagues from several other Japanese research institutions, has now demonstrated that prolonged treatment with MPH brings about stable changes in brain activity that improve reward processing with a commensurate improvement in ADHD symptoms1.

ADHD is thought to affect up to 5% of children worldwide, and about half of those will go on to experience symptoms of the disorder into adulthood. MPH treats the disorder by increasing the levels of the brain chemical dopamine, which is involved in reward processing.

To understand the effect of MPH on ADHD symptoms and specifically reward processing over the longer term, the researchers studied the reward response behavior of ADHD and healthy patients—all children or adolescents—before and after treatment with osmotic release oral system (OROS) MPH. They used functional magnetic resonance imaging (fMRI) to measure brain activity during a task that saw participants rewarded with payment, but in two different scenarios: a high and a low monetary reward condition.

The brain images showed that before treatment with OROS-MPH, ADHD patients had lower than normal sensitivity to reward, as demonstrated by their abnormally low brain activity in two parts of the brain associated with reward processing—the nucleus accumbens and the thalamus—during testing under the low monetary reward scenario (Fig. 1).

However, after three months of treatment with OROS-MPH, there was no difference in the activity of these brain areas in ADHD patients compared with the healthy controls under any of the reward conditions. Their sensitivity to reward had returned to normal, and the patients’ other ADHD symptoms also showed improvement.

Mizuno says that this study goes further than previous work. “We knew that acute MPH treatment improves reward processing in ADHD,” he explains. “Now we’ve revealed that decreased reward sensitivity and ADHD symptoms are improved by treatment for three months.”