A new twist in plant development 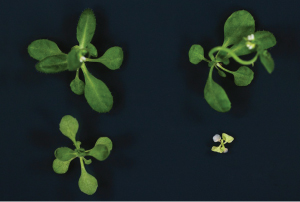 Figure 1: Wild-type (top row) and rid1 mutants (bottom row) grown at 22 °C for 2 weeks and then at 22 °C (left) or 28 °C (right) for an additional 2 weeks. The rid1 mutants stopped growing and died after exposure to higher temperature. Reproduced from Ref. 1 © 2013 American Society of Plant Biologists

Before messenger RNA molecules can be translated into amino acids and eventually functional proteins, the primary gene transcripts must be spliced to remove non-coding sequences. Misato Ohtani from the RIKEN Center for Sustainable Resource Science and colleagues have now identified a key protein involved in splicing and shown that it is essential for several aspects of plant development1.

Splicing is carried out by the spliceosome, which detects the non-coding sequences—called introns—and splices the primary RNA transcripts by a precisely regulated step-by-step process. The spliceosome itself consists of five different RNA–protein complexes, called snRNPs. These complexes have over 50 other associated proteins, all of which are vital for proper spliceosome assembly. However, the roles of only a few of these proteins have so far been characterized.

Ohtani and her colleagues investigated one of these co-factors of spliceosome assembly by performing genetic analyses on mutated Arabidopsis thaliana plants displaying temperature-sensitive developmental defects (Fig. 1). Their target was the mutated gene associated with these defects, called ROOT INITIATION DEFECTIVE1 or RID1. They found that the associated DNA sequence corresponds to a protein of the DEAH-box RNA helicase family of enzymes, which catalyze the twisting and unraveling of the two strands of messenger RNA molecules to allow splicing.

To confirm the RID1 enzyme’s role in splicing, Ohtani and her colleagues used genetic engineering to introduce non-coding sequences into the gene encoding yellow fluorescent protein (YFP), and then transiently introduced the construct into normal and mutated plant cells. In wild-type plants incubated at 22 or 28 °C, almost all of the YFP messenger RNA was spliced correctly. In the mutants, however, splicing efficiency was markedly reduced at 28 °C.

The researchers then examined the distribution of the enzyme by fusing part of its gene to the YFP gene, or the gene encoding an enzyme called β-glucuronidase. In seedlings, RID1 was found in the shoot, roots and tissues that eventually form the leaves, and during reproductive stages in the flower buds and parts of the female reproductive system.

Finally, the researchers investigated genetically engineered plants lacking the RID1 gene. Those with one copy of the gene developed normally, but those missing both had abnormally shaped female gametophytes, which usually form the egg cells.

“We subsequently performed a genome-wide transcriptome analysis to find out which genes were affected in our mutants,” says Ohtani. “We have already identified several candidates, and are currently testing their functions.”