Unraveling the secrets of the turtle shell 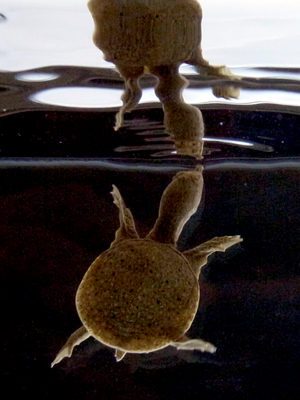 For over 200 years, scientists have been split over the developmental origins of the turtle shell, unsure if it is an elaboration of the internal skeleton or an exoskeletal structure like that in crocodiles and alligators. New research by Tatsuya Hirasawa of the Laboratory for Evolutionary Morphology at the RIKEN Center for Developmental Biology and colleagues has now settled this controversy by revealing that the shell develops in the embryo as a modification of the rib cage and vertebrae1.

Through detailed observations of the embryological development of the Chinese soft-shelled turtle Pelodiscus sinensis (Fig. 1), the researchers found that the ribs initially develop just as in other vertebrates, attached to the backbone with intercostal muscles in between. However, they observed that the intercostal muscle tissue degenerates during further development and is invaded by bony projections called trabeculae, which gradually fuse to form a bony plate. The trabeculae are produced in an area surrounded by bone membrane outside the skin tissue, or dermis. In contrast, the exoskeletal components in the alligator, called osteoderms, develop in the dermis layer of the skin. The observations confirm the evolutionary continuity between the axial endoskeleton and the turtle carapace, bridging the gap in body plan between the turtle and other tetrapods.

Having determined that the carapace develops embryologically as a modification of the internal vertebrate skeleton, the researchers began investigating the evolution of the turtle carapace by studying fossil turtles and earlier marine reptiles. They found that the form seen in the earliest known turtle species, Odontochelys, in which the carapace does not form a closed shell, is best explained by similar embryological development to the modern turtle. Earlier marine reptiles already contained examples of the large plate-like ribs that eventually became incorporated into the carapace. Recent genomic analyses support the possibility that the turtles and these marine reptiles are likely to be relatively closely related in evolutionary terms.

The researchers are now planning to expand their work. “We will further investigate the evolution and development of the ribs and the body wall of the turtle,” says Hirasawa. “In the embryonic development of the turtle, the rib does not extend ventrally, which is very strange. We call this turtle-specific phenomenon the ‘axial arrest’ of the rib. The signs of axial arrest are perhaps recognizable in some fossil marine reptiles. We want to unravel the evolution of this axial arrest, by a combination of developmental biology and paleontology.”