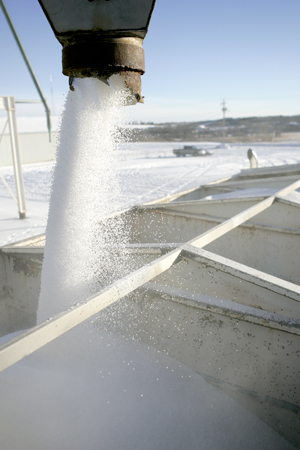 Nitrogen and phosphorus fertilizers are essential in modern agriculture and crucial to meeting the ever-growing global food demand. Nitrogen fertilizer, in the form of ammonia, is produced now in the same way that it has been for close to a century—by the energy-intensive Haber-Bosch process, which uses high temperatures and pressures to split nitrogen gas molecules. Takanori Shima, Zhaomin Hou and colleagues from the RIKEN Center for Sustainable Resource Science have now made a discovery that could allow ammonia and other nitrogen-bearing compounds to be produced energy-efficiently at room temperature1.

Nitrogen gas (N2), comprised of a pair of nitrogen atoms, is abundant in the atmosphere, but converting it to a useful solid form by breaking the triple bond between the nitrogen atoms consumes considerable energy. Chemists have had difficulty finding ways to break the triple bond at mild temperatures without resorting to special electron- and proton-donating reagents, which are generally nonrecyclable and expensive.

Hou and his colleagues instead considered multinuclear transition metal hydrides—cage-like compounds in which several metals are linked together by multiply bonded hydrogen atoms. These hydrides can generate sufficient electrons to break the triple bond and also act as a hydrogen source for the fixation of nitrogen as ammonia. The team also suspected that the metal centers could enhance N2 activation through cooperative effects seen in biological nitrogen fixation and the Haber-Bosch process.

Drawing on their expertise in rare-earth hydrides, the researchers produced a novel complex based on titanium—a transition metal that readily forms nitrogen bonds. Their experiments involved mixing the titanium precursor with hydrogen gas and N2 in a pressure reactor at room temperature. Rather than the pure metal hydride they expected, the reaction produced a strained cubic structure containing four bridged titanium hydrides and, intriguingly, a pair of nitrogen–proton (N–H) units.

To understand how this complex formed, the team went back and monitored each step of the reaction using x-ray crystallography and isotope-labeled spectroscopy. They determined that N2 was activated and cleaved by binding simultaneously to three titanium atoms, and that the hydrides migrated from titanium to the nitrogen portion of the complex. “This is unprecedented, to observe N2 activation, bond cleavage and N–H bond formation steps in one reaction,” says Shima.

Although the researchers are still investigating why the trinuclear titanium complex has such particular affinity for N2 compounds, they are certain that these materials will provide a unique opportunity to develop innovative nitrogen fixation strategies.