Harnessing the power of skyrmions 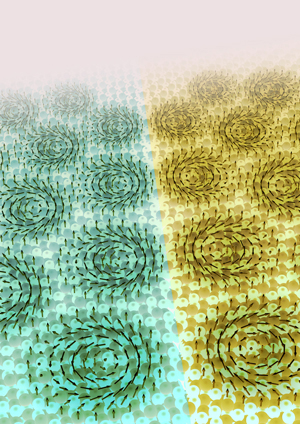 With the ever-increasing amounts of digital information being processed, transferred and stored by computers comes a commensurate demand for increased data storage capacity. For magnetic data storage such as the ubiquitous hard disk drive, this requires not only physically smaller memory elements or bits, but also reduced switching power to avoid heat issues. Yoshinori Tokura and colleagues from the RIKEN Center for Emergent Matter Science, in collaboration with a research team from the University of Tokyo, have now shown that structural control of small magnetic vortex structures called skyrmions could lead to a compact, low-power alternative to conventional magnetic data storage1.

Skyrmions are very stable magnetic structures that can form within a chiral crystal lattice (Fig. 1). “Each skyrmion can be considered as a single particle and could represent an information bit,” says Kiyou Shibata from the University of Tokyo. “The small size of skyrmions is also of great advantage to high-density integration in devices.”

Skyrmions occur rarely in certain magnetic compounds. They only began to attract interest for practical applications when the RIKEN researchers, in previous work, were able to demonstrate that skyrmions can exist near room temperature and can be manipulated using very low electrical current densities of about 100,000 times less than those required for controlling conventional ferromagnetic structures.

In another step toward achieving better control over the properties of skyrmions, Tokura, Shibata and their colleagues studied a range of manganese–germanium magnets by preparing magnetic compounds, in which they increasingly replaced manganese with iron. Using a powerful Lorentz microscope capable of visualizing magnetic structures on a nanometer scale, they then studied skyrmions in the various magnets.

The researchers observed that the size of skyrmions changes continuously with composition and that a ratio of about 80% iron and 20% manganese changes their orientation (Fig. 1). This finding is explained by an iron-dependent change in the magnetic coupling between the magnetic properties of the electrons in the magnet and their movements around the atomic core.

It will now be possible to consider practical schemes to design devices based on skyrmions. For example, skyrmions with the desired size and orientation can be created by tuning the composition of the magnet. “The next stage of our research will focus on the manipulation of skyrmions. In particular, the dynamics of isolated skyrmions in confined structures have been predicted theoretically and would be a good subject for experimental research.”