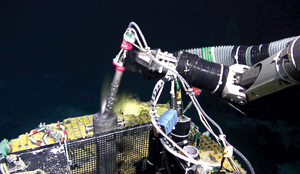 Exploring the deep oceans presents huge technical challenges, many of which could be overcome if there were some cheap and efficient way to deliver power to machines while at depth. To tackle this problem, a collaborative research team including Ryuhei Nakamura from the RIKEN Center for Sustainable Resource Science has now demonstrated a remarkable system that uses natural hydrothermal vents on the sea floor to generate electricity1.

Nakamura and colleagues at the Japan Agency for Marine-Earth Science and Technology (JAMSTEC) and the University of Tokyo developed a robust robotic system that essentially works like a household battery. Hydrothermal fluid from deep-sea vents is enriched with reduced or electron-rich ions, while seawater contains oxidized or electron-depleted ions. By placing one electrode in the hydrothermal fluid and another in the seawater nearby, the system creates a chemical gradient that produces an electric current (Fig. 1).

“Our biggest challenge was to construct remotely operated electrochemical systems for fuel cell operation on the deep sea floor,” says Nakamura. “We are grateful for the help of Masahiro Yamamoto’s group at JAMSTEC, who are world experts in deep-sea exploration.”

The researchers tested their system at a natural hydrothermal vent and at an artificial vent drilled during the Integrated Ocean Drilling Program—an international effort to study the world’s seabeds. At both sites, the system generated sufficient power to illuminate three light-emitting diode (LED) lamps.

“This is the first demonstration of an electrochemical fuel cell at a hydrothermal vent,” says Nakamura. “Previous attempts have been made based on the difference in temperature between the hydrothermal fluid and seawater, by thermoelectric conversion. Our method is more efficient thanks to special electrodes we made from an iridium-coated titanium mesh that resists corrosion.”

Nakamura is hopeful that the new technology will, in addition to benefiting deep-ocean science on a practical level, improve our understanding of how biological ecosystems exploit energy sources in such extreme environments.

“I am very curious about carbon fixation in environments that are isolated from solar radiation, such as the deep ocean,” he says. “Because there is no input energy from solar radiation, the reductive energy discharged from the Earth’s interior sustains all the biological activity there.”

Nakamura and his colleagues have speculated that bacteria, microorganisms and even animals utilize electricity not only as an energy source but also as a signal for communication. “It would be fantastic if we could prove that nature was exploiting electrical energy millions of years before humans,” he says.