Taking the measure of skyrmions

Conventional computers process information by shuttling electric charges around circuits. Electrons also possess magnetic properties, which could be exploited to allow information systems to carry more data at higher speeds while using much less energy. Swirling magnetic vortices called skyrmions could become an essential vehicle for this form of computing because they are only nanometers in size and can be moved around using tiny electric currents.

A research team led by physicist Naoto Nagaosa at the RIKEN Center for Emergent Matter Science has now produced a detailed theoretical profile of these magnetic skyrmions. The researchers modeled how skyrmions behave as they move through a material, calculated the energy needed to create and destroy them and predicted how skyrmions could ultimately be controlled1. 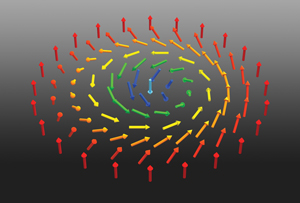 All electrons generate a tiny magnetic moment as they spin, like a bar magnet that can point either up or down. In atoms, most electrons are arranged in pairs such that the ‘down’ magnetic moment of one electron is cancelled out by the ‘up’ of another. In certain materials, however, teaming up in this way generates a strong repulsion between the electrons’ negative charges, causing the electrons to adopt the same magnetic orientation. This parallel alignment pushes the electrons further apart, which reduces their electrostatic repulsion. Such a situation leaves a lot of unpaired electrons throughout the host material, with the result that the sum of all the magnetic moments may be non-zero, leading to spontaneous magnetism. This is the permanent magnetism we commonly see in ferromagnets.

Skyrmions are swirling patterns in the magnetic orientation of atoms in ferromagnetic materials. Around the outside of a circular skyrmion, the atoms’ magnetic moments point in the same direction as the rest of the material. Closer to the center, these magnetizations become increasingly tilted until, at the center of the circle, they point in the opposite direction (Fig. 1). Postulated in the early 1960s by Tony Skyrme, a British physicist, skyrmions were first observed roughly three decades later.

The magnetic moments can tilt because electrons produce an additional magnetic effect as they orbit their atoms. This orbital contribution is usually much smaller than the spin magnetism, so there is very little tilting. In a few ferromagnetic materials, however, interactions between the spins and orbits of neighboring electrons are strong enough to produce a more significant tilt. From one atom to the next, these interactions progressively push the magnetic moments further away from upright. “This twist is the origin of the helical structure embedded in the skyrmion,” says Nagaosa.

Although skyrmions are formed over many atoms, each behaves like a distinct particle, presenting the possibility that the presence or absence of a skyrmion could be used to represent a single bit of binary data in a computer.

Putting skyrmions through their paces 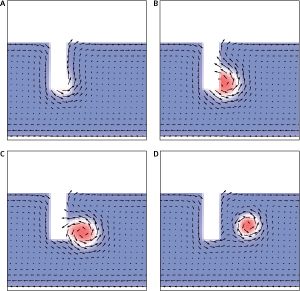 Figure 2: A skyrmion begins to form when an electric current forces atoms to twist away from a notch, until the swirling pattern takes on a life of its own. Reproduced from Ref. 1 © 2013 J. Iwasaki et al.

In 2010, Nagaosa was part of a RIKEN team that directly imaged magnetic skyrmions for the first time. Then, in 2012 other researchers showed that they could drive the motion of skyrmions with an electric current or create them using a short laser pulse.

Nagaosa’s team built on these results to model skyrmion motion through a narrow channel. Skyrmions travel in the same direction as the flow of electrons, but the material’s magnetic field forces them slightly off course, just like a spinning ball veering from its trajectory as it flies through the air. Known as the Hall effect, the researchers found that this process did not significantly impede the skyrmions. A skyrmion some 18 nanometers across, travelling through a channel 75 nanometers wide, covered more than 600 nanometers in a few tenths of a microsecond. They also found that fully formed skyrmions tend to be repelled from the channel edges.

Again using simulations, the research team modeled the formation of a skyrmion by applying an electric current to the corner of a square notch in a ferromagnetic material. The electrons transfer some of their spin to atoms in the material, forcing their magnetic moments to twist away from the notch and forming the seed of a skyrmion (Fig. 2).

As the magnetic moments twist, they drag the moments of neighboring atoms with them, causing the spins to precess around like a gyroscope, creating a swirling effect. Eventually the skyrmion settles down to its most stable size and drifts through the material. Skyrmions require current densities of 1010 to 1012 amperes per square meter to form, but once created can be pushed around with current densities that are hundreds of thousands of times lower.

The simulations showed that the notch required to seed the skyrmion must be just the right size. If the base of the notch is too close to one side of the material, the skyrmion hits the edge and disappears before becoming fully formed. A 90° angle at the bottom of the notch produced the best results in the simulations, and both rounded corners and sharp edges generated skyrmions.

In a further study, the researchers simulated what happens when a skyrmion encounters a boundary between magnetic and non-magnetic materials. With a low current density, the skyrmion was found to bounce away from the boundary, but at higher current densities the skyrmion could be forced right to the edge, where it was annihilated. Nagaosa is now pursuing several different angles of skyrmion research. He and his colleagues are trying to develop materials that can support stable skyrmions at room temperature. They also hope to detect the motion of nanometer-sized skyrmions experimentally and to develop theories to describe how those skyrmions change over time.

Naoto Nagaosa was born in Hyogo, Japan, in 1958. He graduated from the University of Tokyo in 1980 and obtained his PhD in 1986 from the same institution. Nagaosa then held a postdoctoral position at the Massachusetts Institute of Technology in the United States, before returning to Japan where he was appointed lecturer at the University of Tokyo and later promoted to professor in 1998. In 2007, he became a team leader at the RIKEN Advanced Science Institute and is now deputy director of the RIKEN Center for Emergent Matter Science. His main research interests are the theories of strongly correlated electronic systems, spintronics and the gauge theories of topological aspects of electrons in solids.