The magical stability of nuclei 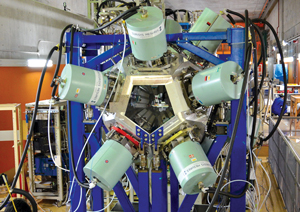 Almost all the mass of an atom is concentrated in its nucleus in the form of protons and neutrons. Some nuclei are intrinsically unstable, existing for only a short time before decaying into stable nuclei. Understanding why some nuclei are stable and others are not could help to explain the presence of matter in the Universe. Hiroshi Watanabe at the RIKEN Nishina Center for Accelerator-Based Science and an international team of scientists have now shown experimentally that nuclei with many neutrons can be more stable than might be expected, but only if the number of neutrons is just right1.

Using the Radioactive Isotope Beam Factory (RIBF), Watanabe and his colleagues created palladium nuclei with 80 and 82 neutrons—labeled palladium-126 (46 protons plus 80 neutrons) and palladium-128, respectively. “Only palladium isotopes with up to 74 neutrons have been studied to date,” explains Watanabe. “Our experiment reached 82 thanks to high-intensity uranium beams and a highly efficient gamma-ray detection system.”

The experiment involved accelerating a beam of uranium ions towards a beryllium target. The collision created a wide variety of nuclei with different numbers of protons and neutrons, and the sophisticated ion selection system at the RIBF allowed specific heavy isotope nuclei to be isolated based on their physical and electromagnetic properties to create a pure heavy ion beam. The team then assessed the stability of these artificially generated nuclei by observing gamma rays emitted from nuclear excited states using an array of sensitive detectors known as EURICA (Euroball-RIKEN Cluster Array) (Fig. 1).

Nuclei with 2, 8, 20, 28, 50, 82 or 126 neutrons or protons are empirically known to be stable, representing the ‘magic numbers’ of nuclear particles. Yet some studies have suggested that these conventional magic numbers disappear if the number of protons and neutrons is highly unbalanced. The results from the RIBF research, however, show that the magic number of 82 neutrons is fairly robust, making palladium-128 relatively stable. “Next, we want to see if 82-neutron nuclei sustain their magical stability when the proton and neutron ratio is even more extremely unbalanced,” says Watanabe.