A model grass gets its genomic profile 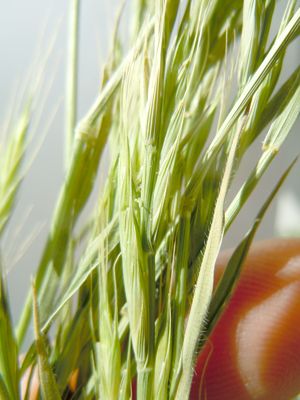 The grass species known as the purple false brome, Brachypodium distachyon, has great potential as a model plant for research due to its short generation time, small size, small genome and ease of breeding. These features make the grass species an attractive stand-in for less tractable but agriculturally important crops such as wheat and barley. However, to fully realize the potential of Brachypodium as a laboratory tool, scientists need more sophisticated genetic resources than are currently available.

Keiichi Mochida and colleagues from the RIKEN Center for Sustainable Resource Science have now constructed a comprehensive collection of all the DNA sequences in the Brachypodium genome that are transcribed into protein-coding messenger RNA (mRNA)1. This resource, known as a complementary DNA (cDNA) library, should help plant biologists to create more robust crops for food and biofuel production.

Model plant systems are essential for the genome-guided breeding of more resilient and higher-yielding crops. “Brachypodium distachyon is a model plant for analyzing the genetic functions and biological systems in temperate grasses, cool-season cereals and dedicated biofuel crops,” explains Mochida. “The improved gene annotation based on full-length cDNAs provides essential information for identifying useful genes involved in various plant processes such as stress tolerance and biomass production,” he says.

Mochida and his colleagues in the Biomass Research Platform Team and the Integrated Genome Informatics Research Unit extracted RNA from 21 different tissue samples of an inbred line of B. distachyon called Bd21. Using the ‘CAP trapper’ method developed more than a decade ago by scientists at RIKEN, Mochida’s team obtained more than 78,000 short fragments of mRNA sequences. From this larger pool, the researchers assembled around 16,000 full-length ‘clones’ of cDNA.

With these clones in hand, the researchers updated and improved the existing Brachypodium genome sequence, adding structural information relating to some 10,000 genes across the plant’s five chromosomes. Mochida’s team found around 580 genes that had not been recognized as protein-coding stretches of DNA from previous bioinformatic analyses of the genome sequence and 362 novel genes identified for the first time in Bd21.

The researchers integrated this information with sequence data available from other economically important grass species in a public resource called the RIKEN Brachypodium FLcDNA database (RBFLDB). According to Mochida, the database now offers a “one-stop shop” for all genomic information in the Pooideae subfamily of grasses, which includes many major cereal crops. “Brachypodium now possesses all the features of a modern model organism,” Mochida says.