A fleeting flash of light 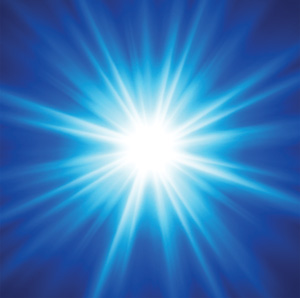 Pulses of light are very useful for probing the inner workings of atoms, molecules and solids. Eiji Takahashi and co‐workers from the RIKEN Center for Advanced Photonics, in collaboration with the Center for Free-Electron Laser Science in Germany, have now created a table-top light source that can generate attosecond optical pulses without the complicated level of stabilization required by alternative approaches1.

The light source is produced by firing two high-power infrared laser pulses of about 30 femtoseconds—just billionths of a microsecond—in duration into a chamber filled with xenon gas. The mixed infrared light, called a two-color waveform, interacts with the xenon atoms, temporarily releasing electrons. When the electrons return to their host atoms, they produce an isolated extreme-ultraviolet (XUV) pulse (Fig. 1) through a process known as high-harmonic generation. The resultant pulses last just 500 attoseconds, some 60 times shorter than the input pulses. Furthermore, the central wavelength of the pulse is 40 nanometers and its peak energy is 1.3 millijoules—more than a hundred times greater than the energy achieved by previous approaches.

Takahashi’s team demonstrated the utility of their light source by applying it to an analytical tool called pump–probe spectroscopy. In this powerful technique, a laser pulse—the pump—strikes an atom and excites its electrons. A second pulse then probes the state of the target at a later time. A full time-dependent picture of the atom and its electron’s reaction to the high-power laser light can then be constructed by varying the delay between the pump and probe pulses. The attosecond light pulses created by Takahashi and his team increase the temporal resolution of pump–probe spectroscopy to a level that enables researchers to gain a deeper understanding of ultrafast processes, such as ionization. “Our next step is to develop such an attosecond-pump/attosecond-probe experiment for observing and controlling electronic processes in atomic and molecular physics,” says Takahashi.

The real strength of their novel light source, however, is the increase in peak pulse power. The strength of the interaction between light and matter usually scales linearly with the power of the laser light. The pulses of XUV light created by Takahashi and his team should open the door to investigating more complex effects in the nonlinear regime. “We also hope that it will be possible to extend our scheme to even shorter wavelengths, taking the light source into the soft x-ray region,” says Takahashi.