Neurons branch out the right way

During development, the embryonic brain generates vast numbers of immature neurons, which migrate away from their birthplace, sometimes over long distances. Once they reach their final destination, the neurons sprout fibers that extend toward other cells, forming connections. Developing somewhat haphazardly at first, these connections are soon refined by sensory experiences, which mold them into extremely precise neural circuits.

Each neuron has two types of nerve cell fiber: densely branched dendrites that receive signals and a single axon that conveys signals to other cells. Decades of research have revealed many details about how axons in the developing brain extend and find the correct pathway, but very little is known about the comparable process in dendrites. Tomomi Shimogori and colleagues from the RIKEN Brain Science Institute have now identified a molecule that orients dendrites during connection development1.

Orienting connections from the deep brain 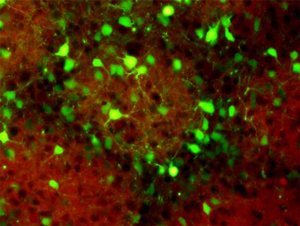 Shimogori and her colleagues focused on a region of the mouse brain called the somatosensory barrel cortex, which receives and processes touch information from the whiskers via a deep brain structure called the thalamus. In the developing barrel cortex, as in other sensory regions of the neonate brain, newly formed connections are refined by incoming sensory information, which causes the dendrites to orientate in the direction of higher sensory inputs (Fig. 1).

The researchers first screened for proteins that are selectively expressed in the barrel cortex during early stages of postnatal development. They found that a molecule called Btbd3 (known as BTBD3 in humans) is expressed from two days after birth, when axons from the thalamus begin to grow into the barrel cortex to form connections.

To determine the role of Btbd3 in neuronal circuit formation, the researchers used a technique called short hairpin RNA inhibition to block synthesis of the protein. Examination of the animals’ brains at 6 days of age revealed an increase in the number of dendrites in the barrel cortex and that many of the fibers were incorrectly oriented. The normal fiber structure could be restored with the addition of human BTBD3 protein, suggesting that the altered dendrite structure occurred specifically as a result of Btbd3 inhibition.

Previous work by other researchers has shown that nervous impulses from axons originating in the thalamus are necessary to induce structural changes in the dendrites of cells in the barrel cortex and that this activity is mediated by a receptor called NMDAR1. Shimogori’s team therefore examined Btbd3 activity in mutant mice lacking the NMDAR1 receptor in the cortex.

By examining the animals’ brains, they showed that the dendrites of cells in the barrel cortex were more extensively branched in NMDAR1-deficient mice than in normal mice and that the branches were also randomly orientated. As this result was similar to that of the Btbd3 inhibition experiment, the researchers tested the expression level of Btbd3 in the mutant barrel cortex. They found that while the cells possessed normal dendrites and the correct level of Btbd3, the protein was distributed differently inside them. In normal animals, the protein was typically localized within the nucleus, but in mice lacking the NMDAR1 receptor in the cortex, the protein was found in the cytoplasm—the fluid-filled area surrounding the nucleus.

These results suggest that nervous impulses travelling from the thalamus to the barrel cortex normally trigger the transfer of BTBD3 from the cytoplasm to the nucleus, where it produces changes in genetic activity that lead to the trimming of excess dendrite branches.

Next, the researchers introduced Btbd3 protein into the primary visual cortex of embryonic mice, which does not normally express Btbd3. This part of the brain processes information from the eyes and contains dendrites that are arranged symmetrically around the immature neurons. The addition of Btbd3 caused all the dendrites to become oriented in the same direction, further suggesting that BTBD3 normally acts to orientate growing dendrites toward active axons. 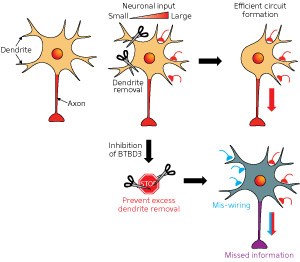 Investigation of the developing visual cortex in ferrets revealed—in contrast to mice—high levels of BTBD3. Neurons in the ferret visual cortex normally have symmetric dendrites. Following damage to cells that receive inputs from one eye or the other, however, the dendrites become reoriented in a specific direction. This reorientation did not occur when BTBD3 synthesis was blocked before the cells received neuronal input.

Together, the findings support the conclusion that BTBD3 plays a critical role in orienting growing dendrites toward axons that are firing nervous impulses (Fig. 2). The differences between BTBD3 protein expression in mice and ferrets also point to an important evolutionary function: mice are far more dependent on the sense of touch than the sense of vision, whereas the opposite is true of ferrets.

“BTBD3 remodels dendrites toward higher neuronal activity, setting up a sharp functional map in the cortex,” says Shimogori. “This provides high-acuity sensory function in cortical areas that have BTBD3 expression.”

In mice, precise connections are far more important in the barrel cortex than the visual cortex—and vice versa for ferrets and other species that are more dependent on vision. The findings therefore suggest that the function of BTBD3 is highly conserved, and is expressed only in those areas of the brain where experience-dependent fine-tuning of neuronal circuits is required for the survival of the organism.

“We are now exploring the mechanism by which animals obtain BTBD3 expression in specific cortical areas,” says Shimogori. “This will reveal how different animals evolved different functions in different parts of the neocortex.”

Tomomi Shimogori was born in Chiba, Japan. She graduated from the Hoshi University School of Pharmacy and Pharmaceutical Sciences in 1993 and obtained her PhD in pharmaceutical science from Chiba University in 1998. After six years of postdoctoral training at the Department of Neurobiology at the University of Chicago, United States, she returned to Japan to join the RIKEN Brain Science Institute (BSI) as a unit leader, exploring the mechanisms of thalamic development and their contribution to cortical evolution. In 2010, she was promoted to team leader of the BSI’s Laboratory for Molecular Mechanisms of Thalamus Development. Her research focuses on the patterning mechanisms of the developing mouse thalamus, differences between the developing thalamus of the mouse and chick, and the role of thalamocortical axons in cortical plate development.