An electrical switch for magnetism 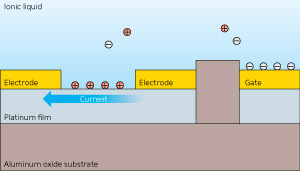 Only a few elements in the periodic table are inherently magnetic. Iron is perhaps the best known, but cobalt and nickel also exhibit this type of ferromagnetism. Scientists have recently discovered, however, that gold, silver, platinum, palladium and other transition metals demonstrate magnetic behavior when formed into nanometer-scale structures. Yoshihiro Iwasa, Sunao Shimizu and colleagues from the Emergent Device Research Team at the RIKEN Center for Emergent Matter Science have now shown that this nanoscale magnetism in thin films of platinum can be controlled using an externally applied electric field1.

Platinum is nearly, but not quite, ferromagnetic like iron, suggesting that it might be possible to induce magnetic properties using external stimuli such as an electric field. To test this possibility, Shimizu’s team fabricated a simple device consisting of a thin film of platinum just a few nanometers thick on an aluminum oxide substrate, and applied an external electric field to it using a conductive fluid (Fig. 1).

Shimizu and his colleagues observed that the platinum sheet’s resistance dropped significantly when exposed to the external electric field, accompanied by a distinct and pronounced Hall voltage fluctuation. After detailed analysis, the team demonstrated that this voltage modulation was the result of a phenomenon known as the anomalous Hall effect.

The conventional Hall effect describes the formation of a measurable electric field known as the Hall voltage when electrons travelling in a magnetic field between two electrodes are deflected from their path, which leads to a build-up of electrical charge on one side of the device. The anomalous Hall effect refers to an additional Hall voltage that only arises in materials with magnetic properties. “This means that the initially non-magnetic thin film of platinum on the aluminum oxide substrate behaves like a magnetic material under the influence of an electric field,” says Shimizu.

Scientists believe that the ability to electrically control magnetism will be crucial for developing future low-power magnetic memories. Magnetically encoded data is used in almost every computer system, but the use of magnetic fields to store and retrieve data consumes a great deal of power. Nanoscale, electrically controlled magnetism could one day enable electrical reading and writing of computer memories at a fraction of conventional energy consumption levels.

“This technique of applying an electric field through liquid is also transferable to other materials,” says Shimizu. “Next, we would like to use it to search for other hidden properties.”