Pinning down viruses with a light touch 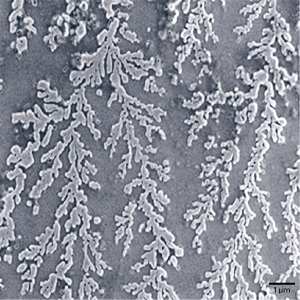 Figure 1: Electron microscopy image of measles virus particles firmly attached to the surface of a slide with a photoreactive polymer. Reproduced from Ref. 1 and licensed under CC BY 4.0. © 2013 Sivakumar et al.

Antibodies in the bloodstream hold the history of a patient’s past infections. Clinicians probe this history by immobilizing protein particles or proteins of clinical interest onto the plastic surface of an assay plate and looking for antibodies that ‘stick’ to those targets after incubation with a serum sample. Yoshihiro Ito and colleagues from the RIKEN Center for Emergent Matter Science have now devised a superior assay that allows researchers and clinicians to obtain such diagnostic information more efficiently1.

For some time now, scientists have been detecting DNA using ‘microarrays’—glass slides featuring immense numbers of precisely positioned spots, each containing a different target sequence of interest. Unfortunately, translating this approach for protein analysis has been problematic. “DNA is made of only four bases and the range of chemical functional groups is very limited,” says Ito. “But proteins are composed of 20 amino acids with many chemical functional groups, which makes it difficult to immobilize different proteins on the same surface using a single method.”

Ito and his colleagues found some success with photo-immobilization, in which proteins are mixed with polymers that essentially turn into ‘glue’ when bombarded with ultraviolet (UV) light. However, as existing polymers are poorly suited for whole virus particles, the team embarked on a search for a superior photo-immobilization medium. The search pointed to photoreactive polyethylene glycol (PEG), which offers numerous advantages. Notably, PEG forms a layer on the slide surface that resists binding by nontarget molecules, thereby yielding more accurate assay results. PEG also responds to lower levels of irradiation, minimizing the risk of UV damage to bound proteins or viruses.

After confirming that the photoreactive PEG layer can successfully affix virus particles (Fig. 1), the researchers developed an automated workflow that enabled them to analyze antibody binding from tiny volumes of patient serum on a microarray in just 20 minutes. By comparison, a standard plate-based assay requires far more serum and takes a few hours to complete. The tests also showed essentially equivalent performances in analyzing patient antibodies for five different viruses, with a false-negative rate lower than 5 per cent in most cases.

The system is now undergoing further development with the RIKEN venture company Consonal Biotechnologies and Ito sees great potential for rapidly testing a larger number of samples against a greater number of targets. “Our microarray system achieves short detection times with small amounts of blood,” he says. “We hope to contribute to society by commercializing this useful system.”