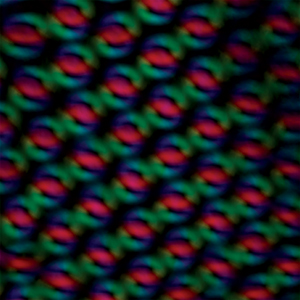 The efficient control of magnetization at nanometer scales holds much potential for the next generation of high-density data storage. One promising approach is the use of skyrmions—nanoscale vortices in the magnetic moment, or ‘spin’, of a material. Xiuzhen Yu and colleagues from the RIKEN Center for Emergent Matter Science and the Japanese National Institute for Materials Science have now reported the first experimental observation of bound pairs of skyrmions1.

Skyrmions are attractive because they are very small and can be made to ‘flow’ and move by the application of electrical current at current densities well below those needed to manipulate domain walls in conventional ferromagnetic materials. This means they could be used to create memory devices that operate at much lower power and at higher data density than conventional magnetic systems.

It has been theoretically predicted that skyrmions could be found in bound pairs called biskyrmions. The two bound skyrmions are predicted to have oppositely oriented spin vortices and the biskyrmion to have a topological charge of two—twice that of a single skyrmion.

“We have realized such theoretically anticipated biskyrmions under a magnetic field and have also found that they can be driven with a current density three orders of magnitude lower than that needed to drive ferromagnetic domain walls,” says Yu. The result is expected to lead to the development of novel low-power, high-density magnetic memories.

The researchers found that the physical size of the biskyrmions depends on the thickness of the magnetic material and the strength of the applied external magnetic field. Importantly, the biskyrmions appear to be relatively stable, although they disappear at temperatures higher than 50 kelvin and under magnetic fields stronger than 0.4 tesla.

In future work, Yu says that the difference in the behavior between skyrmions and biskyrmions needs to be explored in more detail. “The doubled topological charge in the biskyrmion may cause a difference in the dynamics and also modify the skyrmion transport properties compared to the case of the single skyrmion.”