Bioplastic production gets a boost 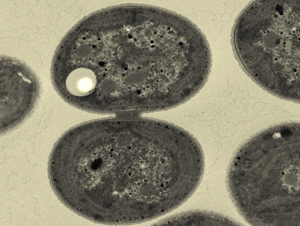 The production of plastics using biological systems such as bacteria could lead to the sustainable manufacture of biodegradable and biocompatible plastics using carbon from the atmosphere. So far, however, it has proved exceedingly difficult to increase the yields of bioplastics to industrially viable levels. Takashi Osanai, Masami Yokota Hirai and colleagues from the RIKEN Center for Sustainable Resource Science have now engineered a cyanobacterium strain that produces triple the normal yield of the bioplastic polyhydroxybutyrate (PHB)1.

The species of cyanobacterium known as Synechocystis (Fig. 1) starts to produce PHB when nutrients such as nitrogen become scarce. This metabolic adaptation helps the cyanobacteria survive under low resource conditions. However, the organisms do not naturally produce sufficient yields of PHB for commercial applications.

To boost the levels of PHB produced by the organism, the research team created a strain of Synechocystis with higher than normal expression levels of Rre37, a regulatory protein known to be involved in sugar metabolism during times of nitrogen starvation. Genetic and metabolic analyses showed that Rre37 facilitates the conversion of glycogen, a sugar storage molecule, into PHB. “In Rre37, we found a novel regulator activating bioplastic production in cyanobacteria,” says Osanai.

The same team previously identified another protein, SigE, involved in bioplastic production. Similar to the results with Rre37, the researchers found that overexpression of SigE, which contributes to the initiation of RNA synthesis, led to more PHB accumulation under nitrogen-limited conditions.

Their latest Synechocystis strain expressed elevated levels of both Rre37 and SigE. Gene expression analysis revealed that Rre37 and SigE each activate different pairs of genes involved in PHB biosynthesis. Extraction of PHB from the cyanobacteria showed that the bioplastic concentrations were even greater in the strain with bolstered Rre37 and SigE activity compared to those with only one overexpressed protein or in the unaltered ‘wild-type’ strain. “By the double overexpression of Rre37 and SigE, PHB levels increased by three times compared to the wild type,” says Osanai. “However, even further increase in bioplastic production is required for commercial applications,” he notes.

In addition to helping transform glycogen into PHB, the researchers documented an important new role played by Rre37 in nitrogen metabolism. Levels of aspartate, a type of amino acid, increased in the Rre37-overexpressing strain of Synechocystis. Compiled transcriptome and metabolome data point to a new metabolic cycle that is something of a hybrid between the well-known Kreb’s and urea cycles, which describe common biochemical reactions in the body.