A new twist in the properties of light 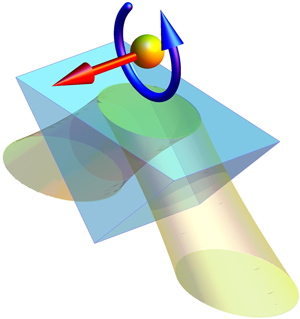 Light has some well-established dynamical properties that have defined our understanding of electromagnetic radiation for over a century. Two of the most fundamental of these properties are that photons of light carry momentum in the direction of propagation, and a ‘spin’ about the propagation axis defined by the electromagnetic wave’s circular polarization. These properties play critical roles in a range of everyday phenomena and experimental interactions between light and matter.

Konstantin Bliokh from the RIKEN Interdisciplinary Theoretical Science Research Group (iTHES) and Aleksandr Bekshaev and Franco Nori from the RIKEN Center for Emergent Matter Science have now made the remarkable discovery that a particular type of light known as evanescent waves possesses unexpected dynamical properties that are in sharp contrast with previous knowledge about light and photons1.

Evanescent waves are produced, for example, when light undergoes total internal reflection at a boundary with another medium. In such situations, the main electromagnetic wave is reflected back into the originating medium and an evanescent wave is produced in the second medium. The evanescent wave decays rapidly away from the boundary but can propagate along the interface.

By investigating the dynamic characteristics of evanescent waves, Nori’s team discovered that the momentum and spin of these waves have transverse components that are oriented at right angles to the plane of propagation. Equally surprising, they also found that the transverse momentum, and not the transverse spin, is determined by the wave’s circular polarization—precisely the opposite to the dependence seen in normal light.

“Although these extraordinary properties seem to be in contradiction with what is known about photons,” explains Bliokh, “we have shown that they reveal what is known as ‘spin momentum’—an enigmatic quantity that was introduced more than 70 years ago to explain the spin of quantum particles.”

The research team’s analysis suggests that these extraordinary properties of evanescent waves do in fact manifest in light–matter interactions, potentially leading to effects that are impossible to achieve and observe using normal light. For example, evanescent waves exert a transverse force and a transverse torque on small particles, where the force is dependent on the circular polarization but the torque is not (Fig. 1).

“Such remarkable properties, revealed in very basic objects, offer a unique opportunity to investigate and observe fundamental physical features that were previously hidden in usual propagating light and were considered impossible,” concludes Bliokh.