Taking x-ray lasers to the next level 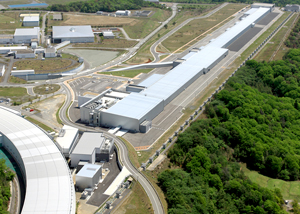 X-rays are used extensively for medical imaging and airport security, as well as for examining the atomic-scale crystallographic structure of materials. Until recently, the high-energy x-rays needed to probe materials at the atomic level could only be produced by very large ring accelerators known as synchrotrons. The development of a new type of x-ray source, called x-ray free-electron lasers (XFELs), has since made it possible to produce intense, ultrashort pulses of x-ray light that have dramatically expanded the utility of x-ray-based material characterization techniques.

Nonlinear optical effects are typically only observed at very high energies in materials with specific nonlinear optical properties. An example of such effects is second harmonic generation, or frequency doubling, by which two photons are absorbed by the material to create a single photon of twice the frequency. More complex third-order or even higher-order effects involving more photons are also possible, but require far higher laser power than the second-order effects such as frequency doubling.

“X-ray nonlinear optics remained almost untouched experimentally since the first theoretical work was reported in 1969,” says Tamasaku. “There have been some reports on second-order nonlinear processes, but none on third-order effects.” The SACLA facility is one of the few places in the world where such an observation has become possible.

In their experiments, the researchers focused the x-ray laser pulses onto a crystal made from pure germanium. High-precision mirrors, developed over the past decade with partners from Osaka University, made it possible to achieve the high light intensities needed to induce a third-order nonlinear process known as two-photon absorption, in which two x-ray photons are absorbed simultaneously and a photon of higher-energy light is emitted. The two-photon absorption process was verified by analyzing the emitted light using a special x-ray spectrometer.

The successful observation of two-photon absorption opens up the possibility of observing a broad range of related phenomena, comments Tamasaku. “Our first demonstration of this third-order nonlinear effect successfully removes this experimental barrier, so that experimental and theoretical physicists can now design experiments using x-ray two-photon absorption, and theorists can consider the possible applications for such processes.”