A step up for terahertz detection 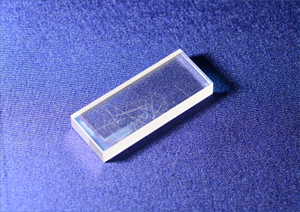 Terahertz radiation, part of the frequency spectrum of light between microwaves and infrared, can pass through many materials and is potentially useful for applications such as airport security scanning. Commercial use of the technology, however, has been held back by the difficulty in detecting terahertz signals. Kouji Nawata and colleagues from the Tera-Photonics Research Team at the RIKEN Center for Advanced Photonics have now developed a system that can upconvert terahertz radiation to higher-frequency infrared light for more efficient detection1.

“Conventional terahertz detectors are thermal sensors that convert terahertz energy into heat,” explains Nawata. “This can cause the sensitivity of these detectors to become worse in hot environments.”

Optical detection after frequency conversion represents an attractive solution. Nawata’s team achieved this goal by taking advantage of the unusual properties of nonlinear optical materials, which have an optical response that is dependent on light intensity. These materials are useful because they provide a way of making two beams of light interact indirectly, where a high-intensity beam of light sets the optical properties of the crystal and thus influences the propagation of a second, lower-intensity pulse. An example of such a nonlinear optical process is difference frequency generation (DFG), which creates a third beam of light with a frequency that is roughly equal to the difference of the two incident beams.

Using their nonlinear optical material in a DFG configuration, the researchers were able to take a 1.6-terahertz pulse and combine it with a high-intensity laser beam to generate a near-infrared signal. They demonstrated that the intensity of the DFG infrared light was proportional to the incoming terahertz radiation, proving the scheme to be a useful way of measuring the strength of the incoming terahertz pulse. The approach was also sensitive, detecting pulses of terahertz light with a miniscule 25 femtojoules of energy.

The real advantage of this technique, however, is its flexibility. Nawata and his colleagues engineered their nonlinear material (Fig. 1) by stacking layers of lithium niobate such that the atomic crystal orientation was alternated between layers. They were able to optimize detection for a specific frequency of terahertz light by changing the periodicity of this stacking or by altering the angle between the light propagation and the stacking directions.

“One potential application that we would like to develop is terahertz wireless communication,” says Nawata. “This technology could enable speeds a thousand times faster than present gigahertz-class communication, and the concept could easily be combined with fiber optics technologies.”