Interrogating a messenger of plant stress 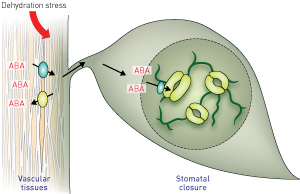 Figure 1: In response to drought, ABA synthesized in leaf veins is transported into nearby ‘guard’ cells by specialized transporters. Reproduced from Ref. 1 © 2013 Y. Osakabe et al.

Plants employ a remarkable range of mechanisms to sense and adapt to their environment and to maintain a strict biochemical balance across cells, tissues and organs. Understanding these mechanisms is crucial to developing crop varieties that can sustain high yields under poor growth conditions.

Through a review of recent discoveries relating to the complex network of signaling pathways associated with drought and salinity responses, Yuriko Osakabe and colleagues from the RIKEN Center for Sustainable Resource Science have drawn attention to several newly identified molecules involved in transport of the plant hormone abscisic acid (ABA)1.

Central to the response of plants to drought and salinity is the transport of ions, compounds and hormones across cell membranes. The production of ABA is a pivotal component of this response, triggering the closure of pores, called stomata, and activating downstream, stress-related genes.

ABA was previously thought to be a long-distance messenger of stress, traveling from roots to shoots. However, studies now suggest that ABA is produced in the veins of the leaves themselves, where it acts on nearby stomata (Fig. 1). Specialized ‘guard’ cells, which close and open the stomata, are also able to produce ABA.

Once it enters a cell, ABA initiates a cascade of signals including the phosphorylation of key proteins, which is described by Osakabe and his colleagues as the ‘molecular hub’ of ABA signaling. Many phosphorylation targets are themselves channels or transporters in the cell membrane, and as a result ABA is able to influence ion transport and pressure inside each cell, known as turgor pressure. The researchers also found that ABA causes the production of reactive oxygen species that act as ‘secondary messengers’, regulating the flux of ions such as calcium, and in turn the electrical polarization of the cell membrane, turgor pressure and guard-cell closure.

Under saline conditions, maintaining internal equilibrium with respect to ions such as sodium and potassium is crucial to plant survival. A number of genes involved in maintaining ion ‘homeostasis’, such as those in the ABA-controlled pathways, are subject to transcriptional regulation, providing not only tissue-specific expression but also expression in direct response to stress.

An improved understanding of the genes underlying stress-related cellular transport in plants opens the door to genetic modifications that could improve crop yields under drought and high-salinity conditions. “Modern technologies such as genome editing and gene targeting, together with basic cross-breeding, provide us with possible strategies to modify the functions of key genes,” notes Osakabe.