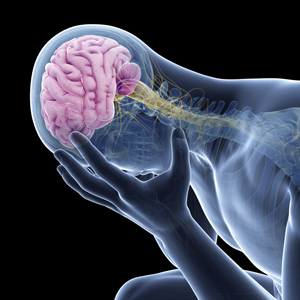 Patients with chronic fatigue syndrome (CFS), also known as myalgic encephalomyelitis, experience severe and often disabling exhaustion. Other symptoms include cognitive dysfunction, pain and depression. Although brain inflammation is thought to be involved in the development of these symptoms, direct evidence of this relationship has proved elusive.

Yasuyoshi Watanabe, Yasuhito Nakatomi, Kei Mizuno and colleagues from the RIKEN Center for Life Science Technologies and other institutes in Japan have now shown using a noninvasive brain imaging technique that the neuropsychological symptoms of patients with CFS are closely associated with widespread inflammation in the brain1.

Positron emission tomography (PET) is a brain imaging technique that uses radioactive tracers attached to particular cell types or molecules to noninvasively track changes in the brain in disease states. To examine the effect of CFS, the researchers used a radioactive tracer that labels activated glial cells, which tend to be associated with neuroinflammation. They performed PET imaging studies on nine CFS sufferers and ten healthy individuals to identify the extent to which brain inflammation plays a role in CFS. They found that the levels of tracer binding were much higher in multiple brain regions in the CFS patients compared with the same brain regions in the healthy participants.

“Because CFS is diagnosed based on subjective symptoms such as fatigue, pain, sleep problems and cognitive impairment,” says Mizuno, “neuroinflammation as observed by PET imaging could be helpful as a more objective biomarker for diagnosis of the disorder.”