Harnessing the healing powers of copper 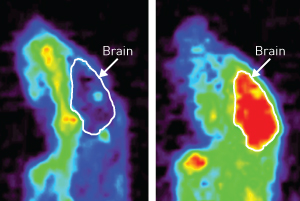 Copper is essential for human health, and is critical to the function of a number of enzymes in the body. This important role is highlighted by Menkes disease—an inherited syndrome caused by a genetic mutation that prevents proper absorption of dietary copper in the intestine, leading to profound developmental and neurological abnormalities.

Yasuyoshi Watanabe and colleagues from the RIKEN Center for Life Science Technologies, in collaboration with researchers from Osaka City University, have now demonstrated the clinical potential of a chemical agent that facilitates safe copper delivery for the treatment of Menkes disease1.

The researchers used an imaging technique called positron emission tomography (PET) to three-dimensionally reconstruct the migration of copper in the body using a radioactive isotope tracer, copper-64 (64Cu). Watanabe’s team had previously used this tracer to track the localization of anticancer drugs, an approach that seemed ideal for studying Menkes disease. “It was natural to use 64Cu to directly follow the fate of copper atoms taken up into the body,” says Watanabe.

A major issue with copper treatment is ensuring that it reaches target organs such as the brain without becoming trapped in the kidneys, where it can cause severe toxicity. Studies using a mouse model of Menkes disease have shown that copper combined with a compound known as disulfiram results in improved therapeutic effects. Watanabe and his colleagues used PET imaging to determine how this occurs.

The researchers found that without disulfiram, copper generally failed to penetrate the vasculature of the brain in the Menkes mouse model, and instead concentrated in the liver and kidneys. In contrast, pretreatment with disulfiram markedly reduced accumulation of 64Cu in the kidneys and increased levels in the brain roughly fourfold (Fig. 1). Importantly, the PET technique used in the study was able to achieve the high resolution needed to precisely measure 64Cu penetration into the interior of the brain. “This could offer a useful optimization method for dose-finding in therapeutic copper supplementation,” says Watanabe.

Based on the promising performance of copper–disulfiram treatment in this and prior animal studies, Watanabe anticipates moving forward with human clinical trials. He expects the 64Cu tracer to be a valuable tool for this next stage of testing, but also intends to use the imaging strategy to characterize shifts in copper distribution under normal physiological conditions. “We plan to study copper transport proteins and copper dynamics in the body before and after energy consumption, such as intense exercise or hard brain work,” says Watanabe.