A clearer picture of brain circuitry

An efficient method for whole-brain imaging at high resolution makes it possible to visualize gene expression profiles, circuits and fine neuronal structures throughout the brain 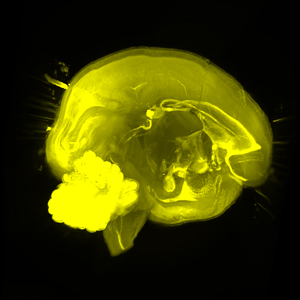 Imaging of an entire brain at the resolution of single cells could lead to a deeper understanding of gene activation patterns and neuronal circuitry during development and disease. Existing whole-brain imaging methods, however, are equipment-, time- and labor-intensive, or tend to destroy the fluorescent labels used to visualize neurons.

Hiroki Ueda and Etsuo Susaki from the RIKEN Quantitative Biology Center and RIKEN Center for Developmental Biology have led a multidisciplinary study spanning six RIKEN institutes and centers and universities throughout Japan that has resulted in the development of a method for preparing, imaging and modeling brain tissue at sufficiently high resolution to map gene expression patterns and neuronal substructures1.

Whole-brain imaging involves first ‘clearing’ brain tissue by removing the lipids that make the tissue translucent and minimizing variations in refractive index within the sample. The prepared tissue can then be imaged using a suitable microscopy technique to reconstruct a three-dimensional model of the whole brain. The technique developed by Ueda and Susaki’s team, called CUBIC (Clear, Unobstructed Brain Imaging Cocktails and Computational Analysis), is an efficient brain-clearing method and computational analysis system that promises to greatly improve the speed and resolution of whole-brain imaging.

The CUBIC brain-clearing method involves passing the brain intact through two specific clearing chemicals over a period of two weeks. CUBIC permits direct and rapid microscopic visualization of fluorescently tagged cells through the entire depth of the brain, and is more effective and reproducible than previous methods, making it possible to clear and image very large brains, such as an entire hemisphere of a marmoset monkey brain (Fig. 1).

By pairing the tissue preparation method with a high-throughput imaging techniques such as light-sheet fluorescence microscopy combined with conventional confocal or two-photon microscopy, Susaki and his colleagues showed that the CUBIC method makes it possible to visualize specific patterns of gene expression through fluorescent labeling, as well as fine neuronal substructures such as axons and dendritic spines.

The computational component of CUBIC is also a powerful tool for research, allowing, for example, two brains with different neural activation patterns to be compared computationally. Another important application is visualization of the binding of antibodies to particular proteins or cell types. This feature allows researchers to image externally applied fluorescent antibody labels, which could be used to mark almost any factor of interest.

“We are next planning to see if CUBIC technology will be applicable to tissues or organs other than the brain,” explains Susaki.