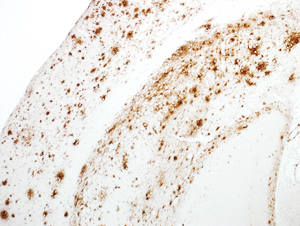 Potential therapies for Alzheimer’s disease are currently studied using genetically engineered mouse strains that display many of the key features of the disease. Most of these mouse models overexpress the amyloid precursor protein (APP)—a large protein that when cut by enzymes releases amyloid beta (Aβ), the peptide responsible for the formation of pathogenic plaques in the brains of Alzheimer’s patients. The problem with this approach, however, is that APP can also give rise to other peptide fragments that are either toxic or neuroprotective, making it difficult to translate research findings to the human disease.

Takaomi Saido, Takashi Saito and colleagues from the Laboratory for Proteolytic Neuroscience at the RIKEN Brain Science Institute have now developed a pair of mouse models that overproduce Aβ without overexpressing APP1. “Our mice could be useful tools to evaluate drug targets and to elucidate the pathogenic molecular mechanisms of Alzheimer’s disease,” says Saido.

To ‘build’ their first mouse model, Saido’s team manipulated the mouse gene that encodes APP using a genetic engineering technique known as a ‘knock-in’ strategy. The researchers first made the Aβ-coding portion of the APP gene more human-like. They then ‘knocked in’ two specific mutations found in people with family histories of early-onset Alzheimer’s disease. One of these, the so-called Swedish mutation, increases the total amount of Aβ; the other, the Iberian mutation, adjusts the ratio of Aβ forms, tipping the balance toward a type that is the most likely to cause plaque build-up. Neither mutation affects the overall expression of APP.

These mice began to accumulate Aβ beginning at around six months of age (Fig. 1). They subsequently developed several Alzheimer’s-related symptoms, including amyloid plaques in the brain’s cortex and hippocampus, with signs of neuroinflammation and synaptic loss in the vicinity of the plaques. The mice also showed signs of cognitive and memory impairment at 18 months of age.

In parallel, the researchers created another mouse model that expressed the Arctic mutation in addition to the Swedish and Iberian ones. The symptoms in these mice were generally more severe and rapid. “The triple-mutant strain would be a useful tool to elucidate pathogenic molecular mechanisms after Aβ deposition,” notes Saido, “while the double-mutant strain could help search for ways to prevent the disease.”

The new mouse models provide a means of studying the effects of Aβ in the brain without the complicating effects of overexpressed APP, and are expected to allow researchers to more accurately evaluate novel therapies for Alzheimer’s.