A stellar odd couple that takes it slow 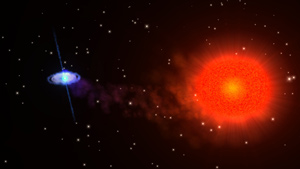 Figure 1: An artist’s impression of an x-ray binary system. The matter that a neutron star (blue) sucks from a regular star (red) leads to the emission of intense x-ray beams. Image courtesy of NASA

Neutron stars are amongst the most exotic astrophysical objects in the Universe. Born from the supernova explosion of massive stars, neutron stars are so densely compacted by their own gravity that a sphere just 20 kilometers in diameter has more mass than our Sun. In rare circumstances, neutron stars can become paired with regular stars to form ‘binaries’ that emit intense pulses of x-rays (Fig. 1).

Teruaki Enoto and colleagues from the High Energy Astrophysics Laboratory at the RIKEN Nishina Center for Accelerator-Based Science have led research that has now uncovered properties of a rare symbiotic x-ray binary (SyXB) that challenge our understanding of these extraordinary astronomical objects1.

Enoto’s team, in collaboration with co-workers from institutions in Japan, the United States and Germany, studied an SyXB with the slowest known rotating neutron star, a system known as 4U 1954+319. Whereas neutron stars usually have rotation periods of hundreds of seconds or shorter, the 4U 1954+319 system is unusual in that the rotation period of the neutron star is about 5.4 hours.

As the small size of neutron stars makes them impossible to study using telescopes, scientists have to extract information from the x-rays that they emit. In the case of 4U 1954+319, the powerful instruments on the Japanese satellite Suzaku made it possible to study the x-ray emissions over a wide energy band. Computer modeling of the data revealed that the magnetic field around the neutron star is very strong in comparison to other neutron stars, but at the same time not as intense as assumed to explain some of its features based on conventional theories. Amongst other seemingly contradictory properties, this places SyXB into a binary-star category of its own.

“In our galaxy, nearly 2,000 neutron stars have been discovered and have revealed a large variety of types, whose diversity, evolution and physical behavior remains poorly understood,” comments Enoto. The results therefore unearth new questions on the birth and evolution of systems such as 4U 1954+319. “For example,” says Enoto, “why does such a high-magnetic-field neutron star exist with a comparatively old star as a companion?”