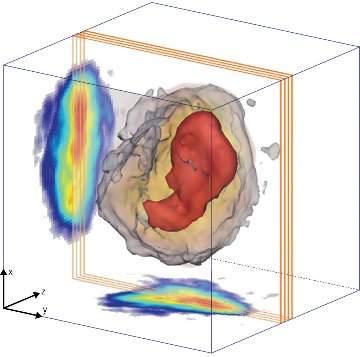 Macromolecular complexes composed of self-assembling proteins and nucleic acids hold promise for a wide range of applications, including drug delivery, sensing and molecular electronics. Scientists have developed a broad array of x-ray scattering techniques for characterizing the shape and surface morphology of these complexes, but probing their internal structure remains a challenge.

Changyong Song and colleagues from the RIKEN SPring-8 Center and RIKEN Advanced Institute for Computational Science have now devised a structural analysis scheme based on complementary advanced x-ray techniques that has allowed them to peer inside an RNA macromolecular complex for the first time1.

The team then performed single-shot imaging experiments using femtosecond x-ray pulses produced by the SACLA x-ray free electron laser (XFEL) facility at SPring-8. The use of intense, extremely short x-ray pulses helped compensate for the weak scattering from the RNAi microsponges. The studies revealed that irrespective of their size, all of the microsponges shared almost the same electron density distribution, suggesting that the high-density core evolves gradually through a dynamic compaction of RNA strands.

Finally, the researchers conducted small-angle scattering experiments using the XFEL. The results further confirmed that the core–shell structure is a generic feature of RNAi microsponges.

“X-ray diffraction is a versatile technique for understanding atomic structures, and with XFELs the technique has become even more dexterous,&uo; says Song. “Multimodal imaging combining both the SPring-8 and SACLA facilities now provides a route to the atomic world.”