A new target for allergy therapies 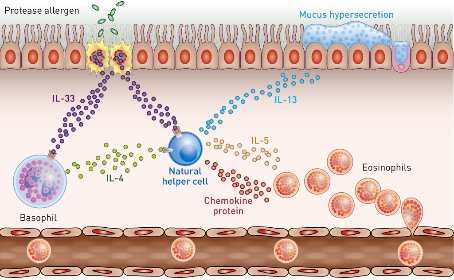 Figure 1: Lung inflammation that causes asthma is linked to the secretion of interleukin-4 (IL-4) from immune cells called basophils. Modified from Ref. 1 © 2014 Elsevier

Many particles and molecules in the environment can trigger allergic asthma in susceptible individuals. The allergic response to some of these allergens results in lung inflammation that can lead to a narrowing of the airways and even severe respiratory difficulty. A research team led by Masato Kubo from the RIKEN Center for Integrative Medical Sciences has now identified that a type of immune cell called a basophil is responsible for initiating a cascade of events that leads to inflammation of the lung in mice after exposure to plant- and dust-mite-derived allergens1.

Protein-chewing enzymes known as proteases that are derived from dust mites and plants can begin to break down cells in the outer layer of the lung, causing damage that can initiate a local inflammatory reaction. While investigating the triggers of this inflammation, the researchers found that these protease allergens induced lung inflammation in normal mice with a complete immune system, but not in mice genetically engineered to lack basophils.

Immune cells, including basophils, secrete the cytokine interleukin-4 (IL-4), which is known to play a role in the induction of asthma. The extent to which basophil-derived IL-4 is involved in the induction of lung inflammation, however, was unknown. Kubo and his colleagues showed that proteases could increase the expression of IL-4 in basophils but not in other types of immune cells. In mice whose basophils were unable to produce IL-4, protease treatment did not cause lung inflammation, suggesting that basophil-derived IL-4 could be the main driver of protease-allergen-induced asthma in mice—a finding that could also extend to humans.

Natural helper (NH) cells are another type of immune cell that is known to play a role in the body’s response to allergens. The researchers showed that NH cells express the receptor for IL-4, and that NH cells treated with IL-4 increase their expression of cytokines such as IL-5 and IL-3, which are also known to be involved in asthma induction. IL-4-treated NH cells also demonstrate a rise in expression of various chemokine proteins known to attract large numbers of eosinophil immune cells to the lung (Fig. 1). This influx of eosinophils triggers inflammation and narrowing of the airway, which leads to asthmatic symptoms such as wheezing.

“The findings suggest that treatments that reduce the numbers of basophils, or that prevent the production of IL-4 by basophils, could be promising for the management of lung inflammation and asthma caused by protease allergens,” says Kubo.