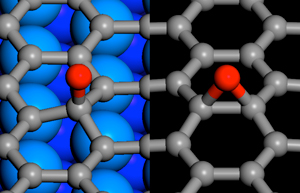 Carbon in the form of graphene—a two-dimensional sheet of carbon atoms in a hexagonal network—is strong, flexible and an excellent electrical conductor. These characteristics make the material very attractive for applications as diverse as electronics, desalination and energy storage. The addition of other elements to the surface of graphene can modify the material’s physical and chemical properties, extending the range of possible applications even further.

Yousoo Kim, Jaehoon Jung and colleagues from the RIKEN Surface and Interface Science Laboratory have now performed theoretical calculations that show that the addition of oxygen to graphene on metal substrates results in enhanced functionalization1.

To investigate the functionalization of graphene using oxygen, the researchers calculated the adsorption energies of different arrangements of oxygen atoms on freestanding graphene, graphite (multilayered graphene) or graphene on a copper substrate. When added to graphene, oxygen usually forms bridges between neighboring carbon atoms to create a structure known as an epoxide, and this structure is exactly what emerged as the most stable arrangement in both graphene and graphite. For graphene on copper, however, each oxygen atom preferred to bond to a single carbon atom that lies above a gap in the copper lattice, forming what is known as an enolate structure (Fig. 1).

The enolate configuration in freestanding graphene destabilizes neighboring carbon atoms. On a copper substrate, however, strong interaction between the copper and carbon results in enhanced stability. This offers the possibility of controlling the chemical structure and enabling the design of functional materials.

The researchers also showed that changing from the epoxide to the enolate form takes only a small amount of energy, suggesting that a uniform distribution of enolates could be produced by treatment at relatively low temperature.

Tailoring the distribution and bonding of oxygen atoms by converting epoxides to enolates could be used to tune the electronic properties of the material. “We believe that the existence of graphene enolate can open a new approach to building graphene-related electronic devices, with opportunities for new graphene chemistry, such as graphene-based catalysts,” says Jung.

Enolate was found to be even more stable when bound to graphene on a nickel substrate, implying that the properties of oxygenated graphene could also be controlled by the selection of metal partners. “Graphene enolates might be observed on most metal substrates,” says Jung. “We now plan to experimentally realize the graphene enolate on a metal substrate using a scanning tunneling microscopy technique.”