Modeling the heart of the atom 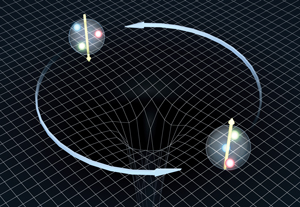 Figure 1: Nucleons (protons and neutrons) are made up of quarks (colored spheres) and have an orientation called spin (indicated by up and down arrows). The spin–orbit force is the interaction between two orbiting nucleons, resulting in a potential well (center) that holds them together. © 2014 Keiko Murano, RIKEN Nishina Center for Accelerator-Based Science

Protons and neutrons are held together at the center of an atom by powerful nuclear forces. A theory that can describe the interaction between just two of these subatomic particles could potentially be extended to predict the existence and properties of more exotic particles, but simulations of such systems using conventional approaches are computationally intensive and have been hampered by a lack of available computing power.

A team of researchers including Keiko Murano and Tetsuo Hatsuda from the RIKEN Nishina Center for Accelerator-Based Science have now developed a method to solve the equations that govern the interactions between particles in the nucleus1.

Nucleons, which include protons and neutrons, are made up of fundamental elementary particles known as quarks and gluons. The three quarks that comprise each nucleon are bound together by a force known as the strong interaction, which only acts over distances of a few femtometers—on the scale of the particles themselves. The development of a complete theory that can explain how this force holds the nucleons together in a nucleus has been a long-standing problem in nuclear and particle physics.

Strong interactions are governed by a physical framework called quantum chromodynamics (QCD). “The properties of a single nucleon are now well simulated using QCD,” explains Hatsuda, “but the nuclear force—the interactions between two nucleons—is more difficult to simulate because nucleons are composite objects composed of quarks and gluons.”

Murano, Hatsuda and their colleagues approached the problem by dividing space and time into a four-dimensional grid of points, an approach called lattice QCD. Calculations with closely positioned points are more accurate, but require more computational power. The team applied this concept to nucleon–nucleon forces on a lattice of 16×16×16×32 points, with each spatial site separated from its neighbor by just 0.16 femtometers.

The key challenge was describing the energy landscape of the system, that is, how the energy or ‘potential’ of each nucleon varies with the distance between it and the next nucleon. The researchers attempted to recreate results from nucleon–nucleon scattering experiments by modeling repulsive central forces and attractive spin–orbit forces, “one of the most fundamental and important interactions in the nucleus,” explains Hatsuda (Fig. 1). Their results were qualitatively consistent with both theoretical calculations and experimental observations.

“We are now enlarging the lattice volume, making it about 40 times bigger,” says Hatsuda. “This work is underway using the K computer at the RIKEN campus in Kobe.”