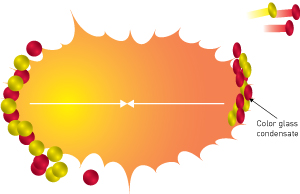 Figure 1: High-energy collisions between nuclei (white arrows) produce a cloud of elementary particles including quarks (red) and gluons (yellow). When gluons form an expansion front, they can produce a wall of matter called a color glass condensate, which eventually dissipates as the expansion continues. © 2014 Larry McLerran, RIKEN–BNL Research Center

The nucleus of an atom is composed of protons and neutrons, which are themselves made up of elementary particles called quarks and gluons. Observing these elementary particles is difficult and typically involves smashing atoms together at close to the speed of light to observe emissions from high-energy collisions.

Larry McLerran from the RIKEN–BNL Research Center and Christian Klein-Boesing from the University of Münster in Germany have now shown that the production of photons in heavy-ion collisions at the Relativistic Heavy Ion Collider (RHIC) and Large Hadron Collider (LHC) is consistent with a theory known as geometric scaling over an unexpectedly wide range of conditions1.

A hypothesis arising from recent particle physics theory is that at extremely high energies, gluons could reach densities high enough to form an intermediate and exotic state of matter called a color glass condensate (Fig. 1), which is a precursor to other exotic states known as glasma and quark–gluon plasma. At high energies and densities, the color glass condensate also exhibits a property called geometric scaling, where physical quantities such as the rate of photon production scale with the size of the nucleus in a manner predicted by theory. “However, the expansion of the system should eventually promote the violation of geometric scaling,” says McLerran.

The researchers showed that the photon yields of collisions conducted at the RHIC and LHC between two protons, two gold ions, two lead ions, or a gold ion and a deuteron (a nucleus containing one proton and one neutron) are consistent with the yields predicted by geometric scaling over a wider range of experimental conditions than previously expected. This result held true despite the large energy difference between the experiments at the two collider facilities. “The fact that our data exhibit geometric scaling suggests that photon production takes place early, before system expansion can dilute the effects of geometric scaling.”

The finding has potentially important implications for quantum chromodynamics—a theory that describes the strong interactions underlying the physics of the nucleus. In particular, it could indicate that physicists have been making some wrong assumptions about the dynamics of photon production at the energies of RHIC and LHC collisions. The researchers suggest that the finding could indicate something very interesting and not yet understood about the evolution of glasma or quark–gluon plasma, although more detailed computational simulations are needed to confirm the dynamics of photon production in such collisions.